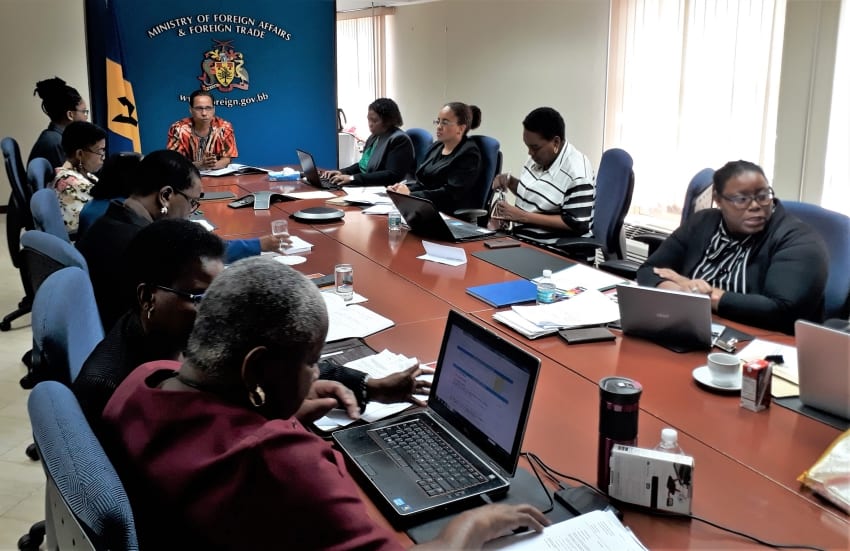 Barbados’ Ambassador to CARICOM, David Commissiong and local officials joined a video conference today at the Ministry of Foreign Affairs and Foreign Trade to discuss the Free Movement of Skills and the Facilitation of Travel for CARICOM nationals. (C.Lashley/BGIS)

Barbadian and other CARICOM officials met today via video conference to see how best to look at the free movement of skills, and the facilitation of travel for CARICOM nationals.

The video conference link-up was held at the Ministry of Foreign Affairs and Foreign Trade, Culloden Road, and was a follow-up on initiatives taken by the Heads of Government of the Caribbean Community (CARICOM).

Barbados’ Ambassador to CARICOM, David Commissiong, explained that the meeting was designed to bring together the relevant officials from all of the Members States of CARICOM, so that they could come up with practical and workable actions and procedures, as it relates to the Free Movement of Persons; the Rights of Establishment, and how service providers could move and work within the region.

He said the initiatives also reviewed the 10 categories of skilled nationals who were entitled to move across the region to live and work; self-employed service providers; and business persons and entrepreneurs who were entitled under the Rights of Establishment to take their enterprises to other Caribbean countries.

The CARICOM Ambassador further stated: “But you know Heads of Government can make decisions, can put programmes in place, but then those programmes have to be properly [and] efficiently implemented, and this is where officials at a lower level in the structure have to come to the table.

Other CARICOM nations participating in the conference were Antigua and Barbuda, Belize, Guyana, Jamaica, Haiti, St. Vincent and the Grenadines, Suriname, and Trinidad and Tobago.  The meeting was chaired by the CARICOM Secretariat and there was also participation from the Organisation of Eastern Caribbean States’ Commission.