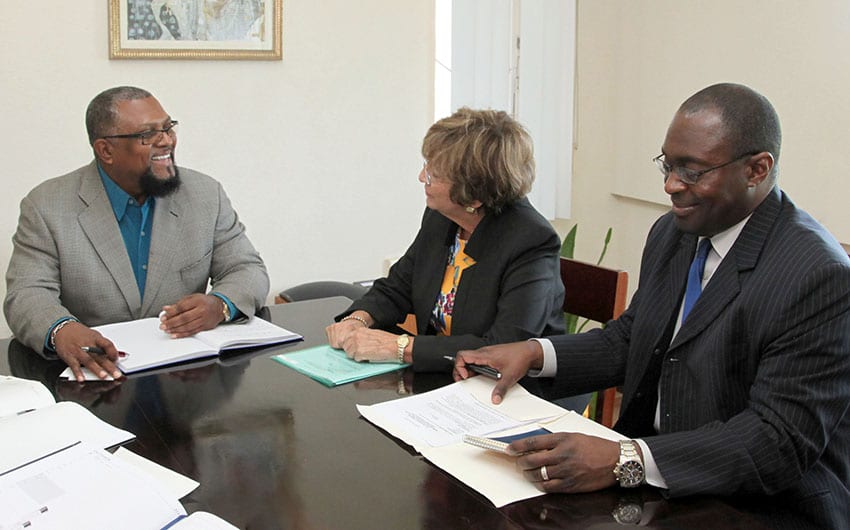 A number of areas in agriculture were discussed recently when US Ambassador, Linda Taglialatela, paid a courtesy call on Minister of Agriculture and Food Security, Indar Weir, at the Ministry’s headquarters, Graeme Hall, Christ Church.

Responding to Ambassador Tagliatela’s query about plans for youth in agriculture, Mr. Weir stated that the Ministry was in the process of developing plans to rebrand agriculture in Barbados, with the determination to change the mind-set of it being seen as a ‘hoe and fork’ job.

He said the Ministry would also seek to promote the possible avenues the youth could venture into, such as agro-technology, greenhouse technology, hydroponics and aquaponics.

The two officials also focused on the United States Government’s ‘Don’t Pack A Pest’ outreach programme.  It is designed to raise public awareness about the risks associated with passengers carrying agricultural and food items in their luggage, and introducing plant pests and foreign animal diseases into the United States and the Caribbean.

According to the US Ambassador, as part of the ongoing US Customs and Border Protection (CBP) surveillance, all agriculture items must be declared and are subject to inspection by a CBP Agriculture Specialist at ports of entry to ensure they are free of plant pests and foreign animal diseases.

Minister Weir assured the Ambassador that Government would sign on to the programme, and through the Ministry’s Plant Quarantine Section would continue its efforts to prevent the carrying of plant pests or foreign animal diseases to the US.

Other areas discussed were food security, sanitary and phytosanitary measures, climate change and agriculture, climate smart agriculture, creating a medicinal marijuana industry and the protection of the Scotland District against land slippage and soil erosion through agroforestry.

Formal diplomatic relations between the US and Barbados were established on November 30, 1966, and both countries maintain resident diplomatic representation.