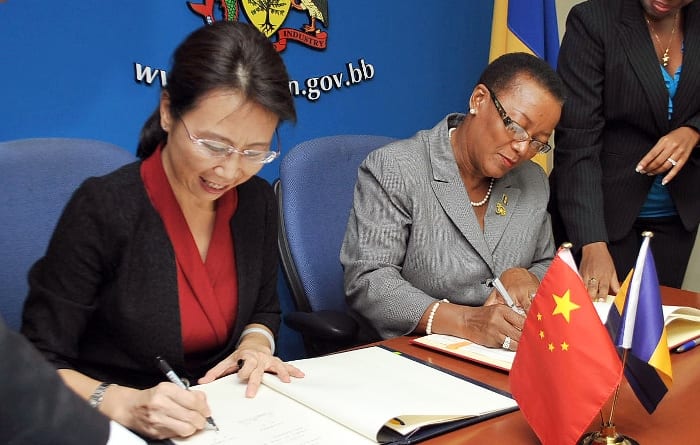 Minister of Foreign Affairs and Foreign Trade, Senator Maxine McClean, and Ambassador of the People’s Republic of China to Barbados, Wang Ke, signing the protocol between the Barbados Defence Force and the People’s Liberation Army of China on Monday.(A.Miller/BGIS)

Minister of Foreign Affairs and Foreign Trade, Senator Maxine McClean, and Ambassador of the People’s Republic of China to Barbados, Wang Ke, on Monday, signed a protocol between the Barbados Defence Force and the People’s Liberation Army of China.

During the signing, which took place in the Ministry’s conference room, Senator McClean explained that the initialisation of the document followed the signing of an agreement between the Barbados Defence Force and China on March 15. Under this agreement, China will provide Barbados with military aid gratis, valued at almost six million Barbados dollars.

“The protocol signed today serves to detail the specific equipment which the People’s Liberation Army has agreed to provide to the Barbados Defence Force. It should be noted that although the Chinese Government has donated military equipment to Barbados on previous occasions – military equipment which has been a tremendous benefit to the Barbados Defence Force in the execution of its duties; this is the largest such donation to date,” Senator McClean said.

The Minister also stressed that the agreement would continue the strong tradition of nation building, a major tenet of which is the security of Barbados and its people.  “The aid is therefore of paramount importance, not only as an opportunity to assist our military, but to secure our gains over the past 50 years,” she added.

Ambassador Wang Ke expressed her delight at the agreement between the two countries. She explained that the equipment to be purchased included a patrol boat.

“I believe that the protocol is a demonstration of the friendship between the People’s Republic of China and Barbados and will play a pivotal role in capacity building, especially for the Coast Guard and in disaster mitigation,” she noted.

Adding that in 2017 both countries would celebrate the 40th anniversary of the establishment of diplomatic relations, the Ambassador opined that the protocol, along with other recent collaborations, had “kicked off” activities to mark the celebrations. “More is expected and we will organise a series of joint celebrations in the first half of 2017,” she said.