The introduction of the Oistins Fish Festival 40 years ago has not only brought economic prosperity for the fisher folk but also improved and enhanced their social status and assisted in the development of their entrepreneurial skills.

This view was expressed by Prime Minister, Freundel Stuart, as he delivered the feature address at the official opening ceremony at Oistins, Bay Gardens over the weekend.

Commending the organisers of the festival  for achieving the milestone of 40 uninterrupted years, the Prime Minister stated that “any assessment of its (the festival) achievements will show that this unique festival has in fact mentored and fostered the cultural and entrepreneurial development of the historic Oistins and its fishing identity…”

Adding that the festival has kept the town “alive” thus making it a veritable hive of social and economic activity, he noted that it has also raised the profile of the area’s fisher folk, ensuring their recognition nationally, regionally and internationally.

He told his audience that it had stamped the image of some of Oistins’ great personalities like the late Berinda Cox (otherwise known as Baby Doots), and Granny Walcott, indelibly on the national personality.

“Its undeniable success over the last 40 years has resulted in the unforgettable legacy of a thriving Oistins, and its neighbouring communities, which shine with pride and which have associated themselves 100 per cent with this great festival…” 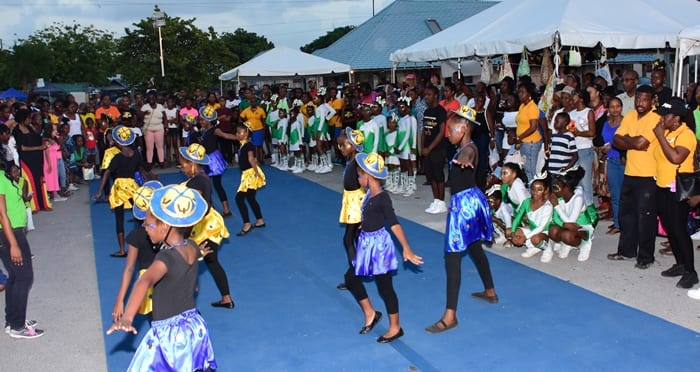 A dance performance at the opening ceremony of the Oistins Fish Festival on Saturday. (C.Pitt/BGIS)

According to the Prime Minister, an estimated one thousand private sector fishing vessels are involved in the local fishing industry with the fleet value of these assets estimated at $96 million.

However, he admitted that there have been some challenges, especially over the last three years, with the landing jetty, and this has resulted in a significant reduction of recorded fish landed at the Berinda Cox Fish Market.

Nonetheless, he assured those present that solutions to the damaged landing jetty are being actively pursued, noting that the Ministry of Agriculture, Food, Fisheries and Water Resource Management, in consultation with the Coastal Zone Management Unit, is working on the required remedial works in order to restore the jetty to an acceptable and highly functional facility.

Also present at the opening was Founder of the Festival, Stella, Lady St. John; Chairman of the Oistins Fish Festival, Herbert Yearwood and Parliamentary Representative for the area, John Boyce.