One Nursery Opened, Another Soon

Early Childhood Education in Barbados has been given a boost with the official opening of the Maria Holder Nursery School at Church Hill, Christ Church, and it will be further enhanced when another nursery school opens at Oldbury, St. Philip, later this month.

During the official opening ceremony of the nursery school today, Prime Minister Freundel Stuart expressed Government’s commitment to the provision of Early Childhood Education and underscored its importance.

He described it as the platform for the construction and development of a child’s spiritual, social, emotional and physical attributes. “These building blocks will prepare children for life with its varying and ever changing nuances, particularly in this dynamic and volatile phase in today’s world,” he contended.

According to Mr. Stuart, the main benefit of Early Childhood Education was that it advanced children towards achievements that enabled them to become well-rounded, self-actualised individuals. He stressed that in the 21st century, this was an invaluable ingredient for the positive development of Barbados.

“Several arguments have been advanced over the years for the need to expand facilities for Early Childhood Education, supported, among other things, by the advancement in research pointing to its place in our educational structure, and by the changes in the structure of the family.

“Research has highlighted the tremendous benefits to be derived from immersing young children in well-organised and developmentally appropriate activities. This knowledge has impacted on the way policy-makers and education planners view the development of the young child,” he said.

The Prime Minister added that changes in the family structure had necessitated the establishment of institutions which offered quality care and supervision during the hours when parents were at work.

He pointed out that in many modern societies, there tended to be a decline in the reach of the extended family, resulting in the need for the state and the private sector to fill “this ever gaping void”. 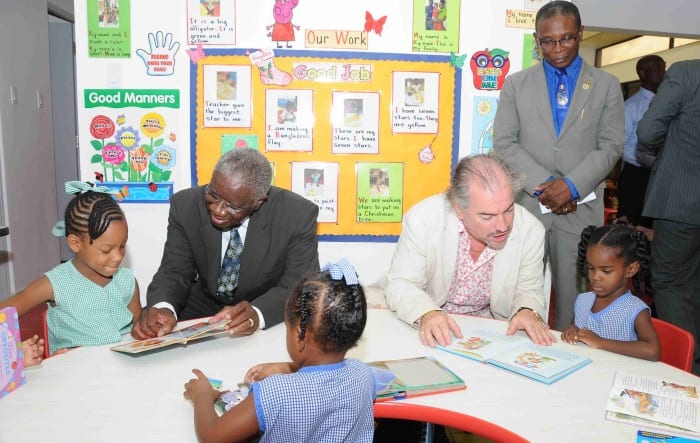 Mr. Stuart noted that Government’s Early Childhood Education expansion programme had, to a large extent, been supported by the development of a partnership with the Maria Holder Memorial Trust.

He described the organisation as “an insistent, committed and dedicated partner”, and placed on record Barbados’ “profound gratitude” for the gift, “whose value cannot in absolute terms be measured”.

He disclosed that Barbados now has 11 public nursery schools and 50 nursery units at 50 primary schools, providing tuition for about 2,200 children. He added that a large number of three to four-and-a-half year olds also accessed tuition at private nursery schools.

The Maria Holder Nursery School at Church Hill will accommodate 150 children, while the nursery at Oldbury will cater to 90 students.

Chief Education Officer, Karen Best, said the staff for the nursery at Oldbury had already been secured and the Ministry of Education was eagerly awaiting the hand-over of the school.

Mrs. Best pointed out that research showed that individuals and societies could benefit greatly when countries invest in early childhood education.

“We know that exposure to well-organised instructional programmes can enhance the emotional, social, and cognitive skills of young children…. By focusing on early childhood education and development, the potential of young children can be significantly increased, and the overall societal benefits are immeasurable,” she stated.

She lauded The Maria Holder Memorial Trust, saying it was cognisant of the importance of providing opportunities for the ‘right start’ in education for young students.