Barbados can boast of having the most qualified and professional lifeguards in the English-speaking Caribbean.

Acting Deputy Permanent Secretary in the Ministry of the Environment and Drainage, Nicole Taylor, expressed this view today as the National Conservation Commission’s (NCC) Operation – S.O.S. (Save Our Selves) programme was relaunched at Browne’s Beach.

Speaking during the official opening ceremony, Mrs. Taylor also described the Lifeguard Service as the “vanguard of drowning prevention in Barbados”.

“The lifeguards play a vibrant role in Barbados through the monitoring of beaches at 17 sites across the island to ensure the safety of all beach users. …This role can be defined as having full responsibility for the prevention of loss of life in and around our aquatic environment,” she said.

The Acting Deputy Permanent Secretary disclosed that a new lifeguard tower was expected to be constructed during the current fiscal year bringing the total number on the island to 16.

“The placement of these signs will greatly assist the lifeguards in the course of their daily duties,” she noted. However, while commending the training and skills of the lifeguards, the Acting Deputy Permanent Secretary said lifeguarding was about 90 per cent prevention and 10 per cent intervention.

She urged sea bathers to adhere to the instructions given by lifeguards and observe the flags posted at beaches warning them of possible or imminent danger.

Mrs. Taylor also reminded parents that they needed to be “extremely” vigilant while their children/wards were in the water or on the beach, whether or not the beaches were supervised by lifeguards. 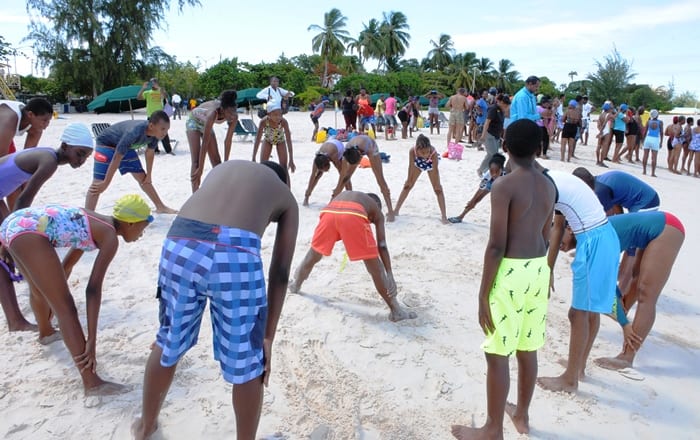 These sea bathers were put through their paces by this lifeguard on Browne’s beach this morning during the relaunch of Operation – S.O.S. (B.Hinds/BGIS)

Meanwhile, Acting General Manager at the NCC, Michael Thompson, explained that the S.O.S. programme was designed to acquaint participants with the experience of ocean swimming and its hazards, while exposing them to an environment that taught respect for the marine environment.

“It is anticipated that upon completion of the course, participants will be able to save themselves,” Mr. Thompson said.

He added that they should also be able to understand and identify some of the threats that might be encountered in the aquatic environment, and obtain a greater understanding and respect for the marine environment.

This year’s course runs for six weeks and comprises 100 participants ranging from age 10 and over.