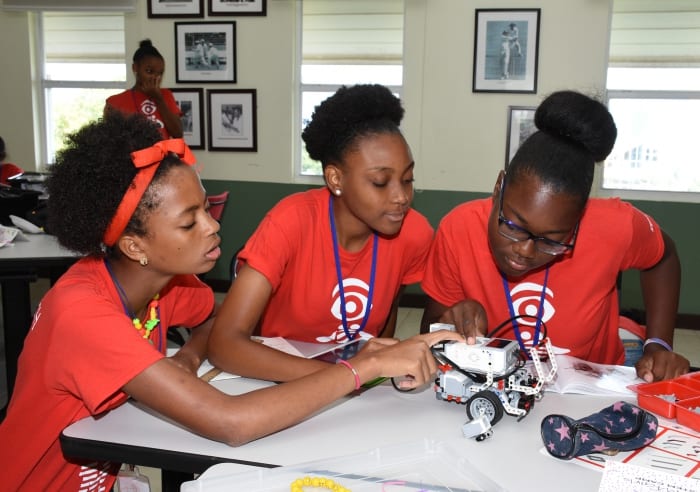 Three of the 33 secondary school girls who took part in the recent IBM STEM Camp. The girls are examining a robot which they built and programmed with materials provided by IBM.​ (GP)

Over 30 teenage girls from secondary schools across the island recently took part in the IBM’s three-day STEM (Science, Technology, Engineering and Mathematics) Camp, held at the 3Ws Oval, University of the West Indies.

The camp was a partnership between IBM, Rotary Barbados, The UWI, Cave Hill Campus, and the Ministry of Education, Science, Technology and Innovation, through the National Council for Science and Technology (NCST).

Acting Director of the NCST, Charles Cyrus, said girls were targeted for the camp because they were under-represented in STEM careers and, in particular, high technology careers.

“The focus was to expose girls to the possibilities and career choices in STEM. [They] learned about technology and engineering through hands-on activities that included learning how to program robots, how to problem-solve, and how to extract DNA from a banana.

“Students also created electrical circuits to produce sounds and light and built and [programmed] robots to pick up blocks and carry them to a pre-determined spot. Some activities of the robot were controlled by instructions provided by a program created on an iPad,” Mr. Cyrus explained.

The girls also got to meet a number of scientists and technologists from various science and technology backgrounds, some of whom gave short talks on their careers.

Mr. Cyrus pointed out that students were extremely enthusiastic about the camp and, at the end of the three days, some had even expressed a desire to pursue careers in science and technology, including programming.

The IBM STEM Camp was designed to foster a new generation of scientists and engineers and encourage young people who have participated in these programmes to seek out careers in STEM.