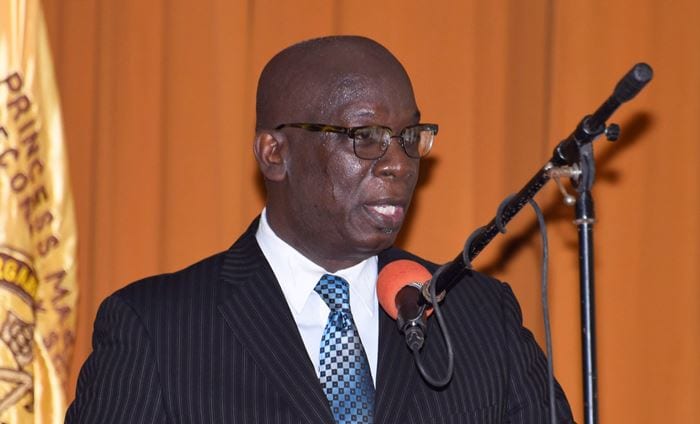 Minister of Education, Ronald Jones, says that teachers in Barbados are focused and determined and have the care and education of our children, and their development, uppermost in their minds.” (FP)

The dedication shown by this island’s teachers and those who partner with Government to meet the educational needs of students has not gone unnoticed.

This was made clear last Saturday night as Education Minister, Ronald Jones, addressed the graduation ceremony for 60 teachers who undertook studies leading to either the MSc. in Education in Early Childhood Settings or a postgraduate certificate in Early Childhood Education, from Wheelock College, Boston, Massachusetts. The event was held at the Derrick Smith School and Vocational Centre, Jackmans, St. Michael.

While noting he had seen the emphasis being placed on the development of several aspects of the education sector, Mr. Jones said: “Teachers in Barbados are focused and determined; they have the care and education of our children and the development of them uppermost in their minds.”

The Minister pointed out that early childhood education, care and development had been of particular interest and attributed success in this area to collaborative efforts with entities such as the Maria Holder Memorial Trust.

Praising the Trust, which helped to sponsor the Wheelock programme, he said: “At the end of the current exercise in both the infrastructural development of the schools and these qualitative improvements and effectiveness issues in early childhood education, I suspect that they would have spent in the region of $80 million or so.”

Further commending the Maria Holder Memorial Trust, he noted they had been “excellent partners” not only in the development of early childhood education but in satisfying the Ministry’s requests “to advance education and learning in Barbados”.  Such commitment, Mr. Jones said, reflected the importance of partners in education to ensure the education agenda was taken forward.

Those present heard that although Barbados had not fully achieved full participation of all its three-year-olds in early childhood education, this goal would be attained by 2019, with all of the country’s three-year-olds placed either in a private or public nursery education setting.

To this end, the Education Minister noted that four other Maria Holder Nursery Schools would soon follow the three currently opened at St. Thomas, Christ Church and St. Philip. He revealed that the Government Hill Nursery School in St. Michael would also be modernised.

Meanwhile, President of Wheelock College, David Chard, reminded the graduates they were leaders who needed to equip others with similar knowledge, inspire them and prepare their charges for change.

“Don’t expect things to change without you inspiring…Your postgraduate certificate or Master’s degree from Wheelock is not a set of knowledge but is preparation for change. As a teacher, particularly a teacher of young children, you have to anticipate the changes they will see ahead of them,” he advised.