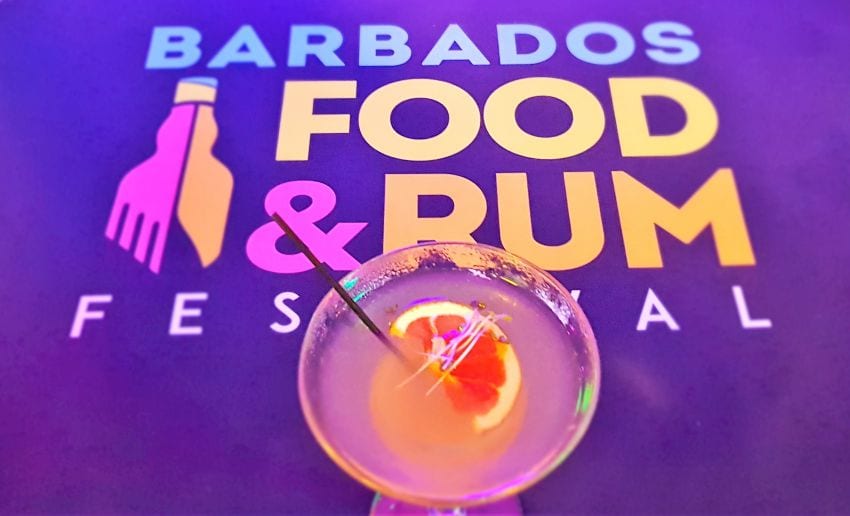 Barbados’ Food and Rum Festival is a strategic marketing tool used to increase awareness and drive visitation to the island.

This is according to Chief Executive Officer of the Barbados Tourism Marketing Inc. (BTMI), Billy Griffith.

In an interview with the Barbados Government Information Service at Taste of Exotica – A Signature Rum Event at Limegrove Lifestyle Centre, Mr. Griffith said scores of journalists were on island to cover the annual festival.

“The Food and Rum Festival helps to share the story of Barbados’ culinary culture through local chefs and mixologists with the world. So we’ve got over 65 journalists on the island this weekend enjoying the festival and we think that’s going to equate to more writing and more coverage for the festival overall,” he said, adding that through the BTMI’s United States office, 150 travel agents were also on the island.

“They are also touring Mount Gay, Foursquare [Rum Distillery], going to Oistins and having cooking classes with Barbadian Chef Creig Greenidge. It’s all promoting the island so despite all the challenges of the past year or so for tourism, we continue to try to push for growth and we think that we are on the right path,” he said.

The BTMI CEO added that the island’s Food and Rum Festival was a brand built over nine years but pointed out aspects of food and rum on the island were promoted year round.

“We do it with special events overseas, we take our local chefs overseas as well and that’s how the event evolved. It’s evolving because we’re going to be elevating our local chefs to become the stars of Food and Rum over time,” he explained. 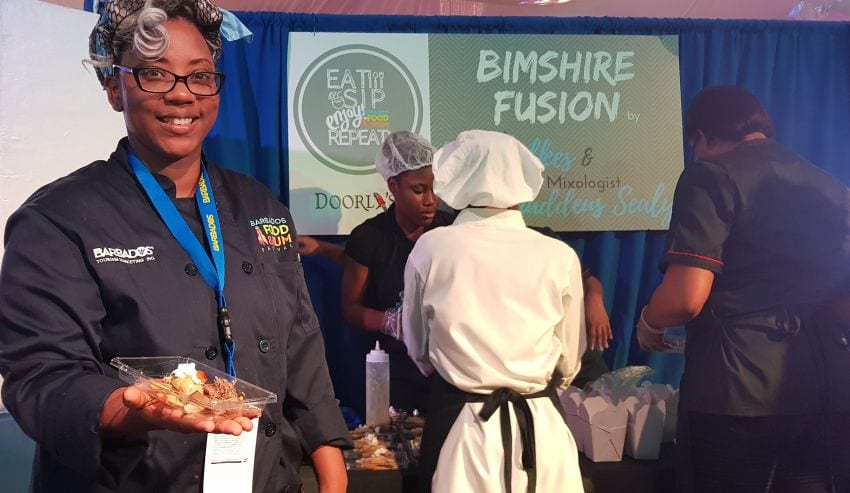 Chef Rhea Gilkes displaying some of her handiwork at Taste of the Exotic – A Signature Rum Event at Limegrove Lifestyle Centre last Friday. (J.Weekes/BGIS)

And local chefs were really the stars of the show, as they whipped up delicious dishes to the delight of patrons. The lone female chef for the night was Rhea Gilkes, the Executive Chef at Fusion Rooftop and owner of Edible Café, both in the Limegrove Lifestyle Centre.

Her menu featured Braised Black Belly Lamb Shank, Smoked Rabbit and See-Through Sushi topped with yellowfin tuna, avocado and sea egg. “I am very, very big on sourcing locally. I try to bring out the best of Barbados.

“So, even if you are going to make Japanese or French food, buy fresh, local, organic produce and feed your customers the best. That’s what we are doing here tonight and we are really happy,” Chef Gilkes said. 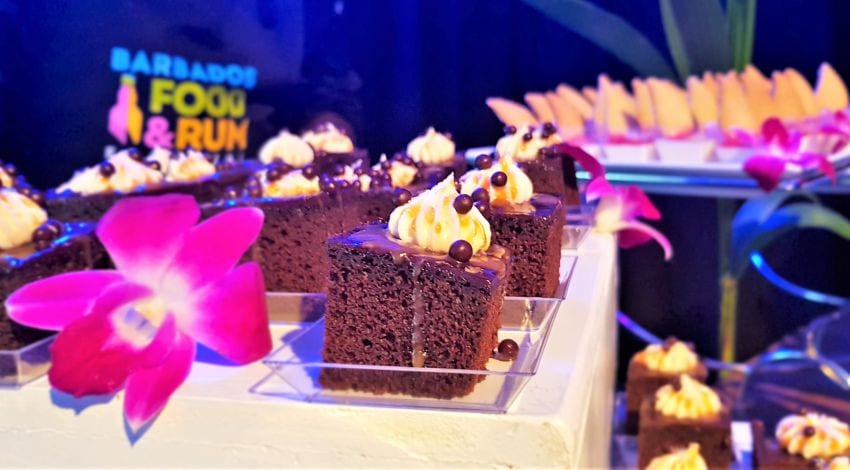 Some of the tasty desserts prepared by Chef Jamal Whittaker at Taste of the Exotic – A Signature Rum Event. (J.Weekes/BGIS)

Collectively, patrons enjoyed Taste of Exotica – A Signature Rum Event. Pamela, a visitor from Paris, France commented, “It was nice to try different cuisine and I enjoy the rum as well.”

Miss Universe Barbados, Meghan Theobalds, gave the event two thumbs up.  “I am eating what looks like a conkie in pancake form; it is absolutely delicious it has this sorrel compo that is actually very citrusy so it is a nice combination.”

Radio broadcaster of Y103.3 FM, Gaynelle Marshall, said she thoroughly enjoyed the drinks: “All I remember is that it has five of something but what I love is that it is topped with these amazing little fruit balls out of mango that literally burst in your mouth. Think about fruit flavored bubble wrap, it’s citrusy and tangy. Good stuff!”

She added, “This event is a fantastic showing of our culinary expertise…, Barbadians know how to fuse flavours and tantalize the taste buds.”

CEO of BTMI, Billy Griffith, said plans for 2019 were already under way.  “Every year we make changes, we make adjustments and we try to make it better. Our overall objectives are twofold: one is to drive awareness of the destination and two is to drive visitation to the island, and I think Food and Rum does that in both aspects. We will build on it and it will get better and better.