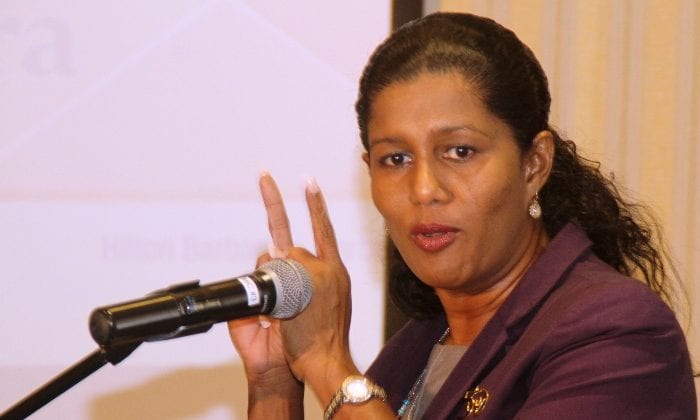 Minister of Labour, Senator Dr. Esther Byer Suckoo, has stressed the importance of adopting good soft skills, an area which employers are paying closer attention to during the hiring process.

Speaking during the 2017 edition of the World of Work Showcase at the Lloyd Erskine Sandiford Centre today, Senator Dr. Byer Suckoo told the large gathering of students that the hosting of annual career showcases for more than two decades and the introduction of career counselling in secondary schools since the 1990’s were two of the earlier measures introduced to give students advice to guide their future career choices.

She reasoned, that though these measures had been successful, today’s society demanded new approaches to assist students with their preparation for the world of work.

“With employers placing greater emphasis on the soft skills and good social graces, there appears to be some lament about the lack of these skills.  It is for this reason that new programmes have had to be provided for you [students] to acquire such skills.  It seems that today’s family and society are not necessarily reinforcing these behaviours,” the Minister emphasised.

The Minister of Labour also touched on the importance of punctuality.  She told the students that punctuality was a very important trait that employers were looking for in today’s world of work.