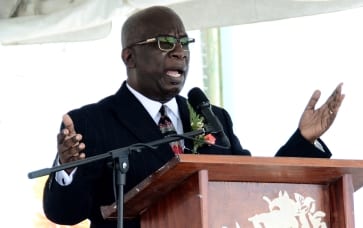 The Student Revolving Loan Fund (SRLF) is “under some stress” and the Minister of Education, Ronald Jones, has called on defaulters to pay up the $30 million owed to the institution.

Mr. Jones made the comments today during a press conference at his Ministry’s Constitution Road, St. Michael headquarters to announce the 2016 scholarship and exhibition winners.

The Minister said: “There is a simple principle – he who borrows should repay – especially in a loan revolving fund. You can’t keep looking for new money to bring in all the time when the fund should be revolving. You are helped, you pay back, particularly where there is a low interest regime and the Student Revolving Loan Fund has over time said to persons who defaulted ‘come in and we will … give you room, leeway to meet your commitments’.

“We will renegotiate with you because there might be some legitimate reasons. A lot of the reasons are not legitimate at all; there are just some people who don’t like paying back when they borrow… You borrow; pay back the institution’s money.”

The Education Minister disclosed that the Caribbean Development Bank (CDB) had been asked for assistance to the tune of BDS $15 million and that was pending. He noted that if at least half of the money owed was paid, the funds were received from the CDB and the regular inflows to the SRLF continued, there would be enough money to service the fund to 2020.

He noted that borrowers had grown from 300 to 1,500 within recent years and pointed out that this had placed greater stress on the Fund.

In response to reports carried in the Press today which suggested that the Fund was depleted, the Education Minister assured applicants that the Ministry was revisiting the issue of the availability of loan funds and they would be receiving further communication on the matter in coming weeks.

Mr. Jones stressed, however, that funds continued to be available for those persons who had previously borrowed and been approved. “There are no issues with those funds. The issue relates to new applicants who were not approved,” he explained.