Pig Farmers To Work In Canada 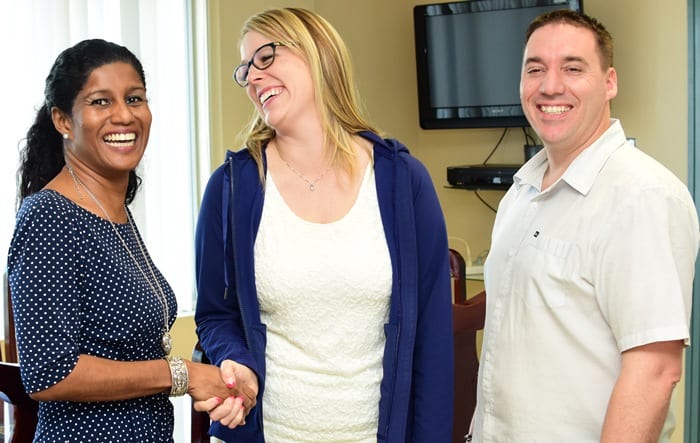 A selection of local workers with experience in pig farming and animal husbandry has satisfied the requirements to work on Cronin Farms in Ontario, Canada.

During the visit, Mrs. Cronin revealed that they were looking for 12 to 15 persons initially to work indoors on their farms; and facilitate the upkeep of their pigs over a two-year period. As such, Minister Byer Suckoo assured the potential employers that the selection of the “right” candidates was critical to her Ministry.

“The selection and screening process includes the application, interview, medical screening, as well as police checks through our police department, which would verify that their records are clear…

“Through this process we try to eliminate those who don’t appear to have the requirements or the right attitude,” she explained.

The Minister further noted that foreign agricultural programmes of this nature had provided good opportunities for Barbadian workers over the past 50 years, enabling them to support their families through gainful employment.

She opined that although Barbados, with its “tiny” labour force, could not provide the same quantity of workers as countries like Guatemala, Mexico and Jamaica; the positive reputation of Barbadians in the programme spoke to the quality of our workers. And, she insisted, it was important that this reputation was maintained.

“At the end of the day…we do not want employers to stop looking at Barbados as a source country because we have sent the wrong individuals,” the Labour Minister stressed.

While noting that the Cronins also had farms in the United States, the Minister revealed that she recently travelled to Washington DC to meet with US Agricultural Employers, to secure employment for workers on the US H2A Agricultural Work Programme. She added that her presentation there was received with “much interest and enthusiasm.”