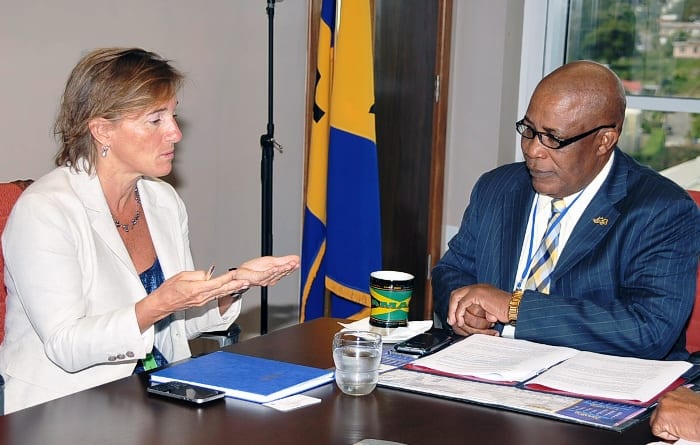 Government is working on several projects to advance its efforts to create a green economy.

This was revealed on Tuesday by Minister of the Environment and Drainage, Dr. Denis Lowe, during a courtesy call with Canada’s High Commissioner, Marie Legault, at the Ministry’s Warrens Tower II, Warrens, St. Michael office.

Dr. Lowe stated that like most other countries, Barbados traditionally relied on fossil fuel, but a shift was being made towards green energy solutions. He disclosed that Government was working on creating a green island platform that included waste-to-energy, wind and solar energy.

Those plans, he explained, include ensuring that at least 29 per cent of the country’s requirements for energy were met by alternative energy and not fossil fuel. However, the Minister said that if all goes according to plan, Barbados will exceed that amount.

In addition, Dr. Lowe noted that to facilitate the transition to alternative energy, Government was working with financial institutions to assist entrepreneurs in obtaining the support they needed.

Reordering the way of thinking of citizens from a fossil fuel programme to a green waste programme was also discussed at the meeting, and the Environment Minister said interventions had been made across various sectors and agencies, including schools and the fisherfolk community.

He also identified recycling as one area of consideration by the Ministry, and lamented that while Barbados produced the waste products, someone else was doing the recycling.

However, Dr. Lowe told the Canadian High Commissioner that Government’s capacity to finance projects was “very restricted”, and therefore the best opportunities for financing laid with companies who were willing to invest.

Ms. Legault said the Canadian High Commission had earmarked certain projects for the Caribbean region, one of which was green energy, and also had systems in place for their financing.