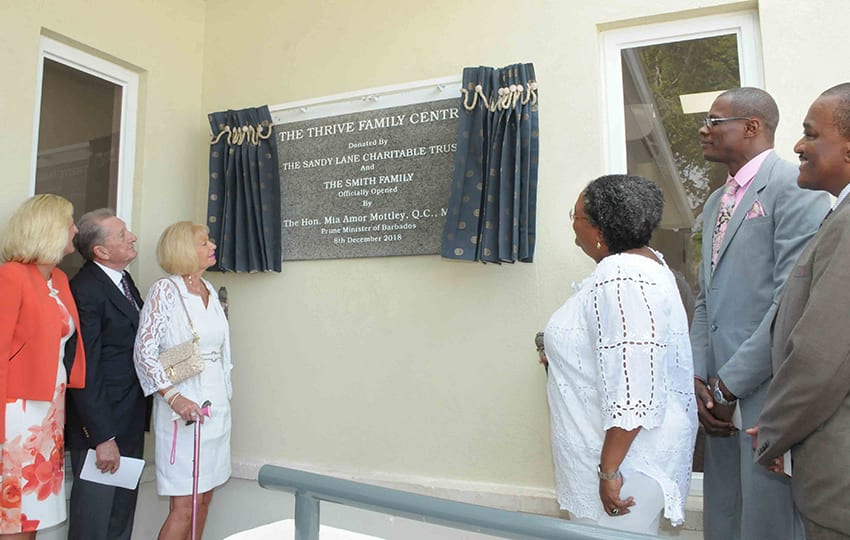 Prime Minister Mia Amor Mottley at the unveiling of the plaque of the new Thrive Family Centre. Also at right are Hospital Director, David Leacock and Minister of Health and Wellness, Lieutenant Colonel, Jeffrey Bostic. From the left are Trustee of the Sandy Lane Charitable Trust, Phillipa Challis; Grand Patron of the Trust, Derrick Smith and his wife, Gay. (B.Hinds/BGIS)

There are plans to create a residential facility for school children with behavioural problems for whom long-term intervention may be necessary, but it will not happen immediately.

News of this came from Prime Minister Mia Amor Mottley last Saturday, as she addressed a ceremony to officially open the Thrive Family Centre, a psychiatric facility for children, located on the grounds of the Psychiatric Hospital.

The Prime Minister, who was Minister of Education when the Edna Nicholls Centre was established, told her audience that that centre, which caters to children exhibiting behavioural problems in schools, was always only intended as a first step.

“We always knew that that could not be the last station and that we would need to create a residential facility for those who needed more dedicated help in order to become productive citizens in this country rather than be destabilizers in the school environment,” she stated.

Ms. Mottley said that two of her greatest regrets in respect of the education of children in Barbados were that the residential facility had not become a reality and that the Alma Parris School had been closed.

“Our economic circumstances do not allow us to move as quickly as I would like to correct these two issues, but if we are going to have productive citizens in this country we have to correct them and we have to provide better systems,” she said.

In the interim, Prime Minister Mottley stated there was a need for Barbadians of all walks of life to give back by going into communities and mentoring young people.

This charge will be led by members of Cabinet, she said, explaining: “My Ministers will tell you that I speak to them of not being Ministerial and I do that because a Minister and a Ministry is a job that we do, not who we are.  And therefore, we have to be able to move easily among the families in our communities and the children in our communities who need help.  Not all help comes from money; not all helps comes from even giving a job. Very often it is the passing on of information, the sharing of perspective, the underscoring of values.”

Prime Minister Mottley said she was committed to reintroducing a comprehensive parental education programme, emphasizing that in order to help children, the entire family must be helped.

“You might give a child an opportunity, but fundamentally if you don’t bring that family along with that child, the child becomes an adult who is forever scarred and who forever carries with them a burden that minimizes their ability to integrate and to become good citizens of our country,” she stated.