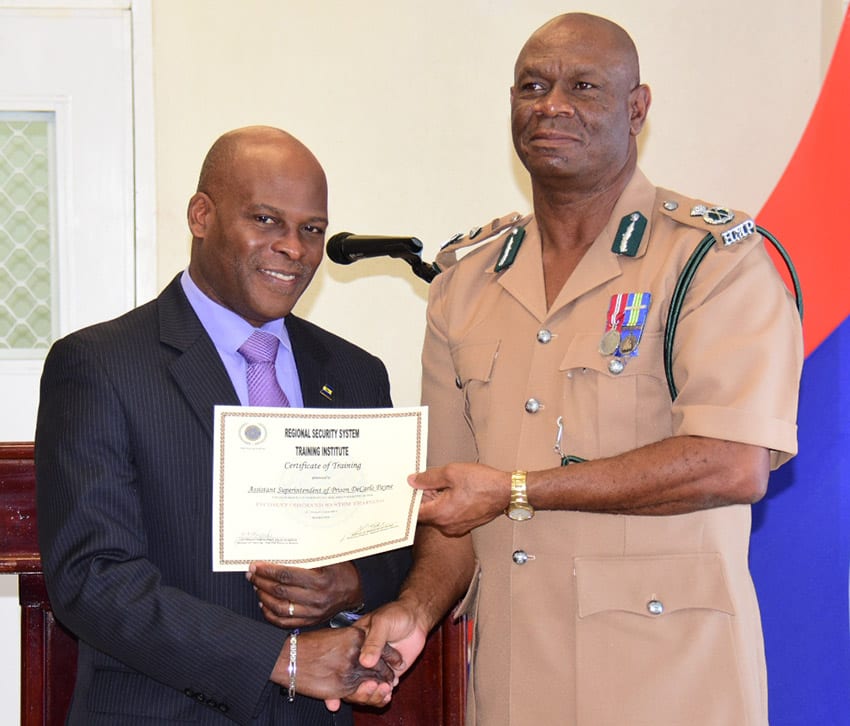 Minister of Home Affairs, Edmund Hinkson presenting a certificate of training to Assistant Superintendent of Prison, Decarlo Payne, at the closing ceremony of an Incident Command System workshop for prison officers of the Barbados Prison Service at HMP Dodds recently. (GP)

Standardized policies, tactics and operations among emergency response agencies are important to effect a coordinated response during periods of crisis.

Minister of Home Affairs, Edmund Hinkson, made this point as he addressed the closing ceremony of an Incident Command System workshop for prison officers of the Barbados Prison Service at HMP Dodds, recently.

He explained that a standardized approach was necessary at the national level when multiple agencies such as the Royal Barbados Police Force, the Barbados Fire Service, the Barbados Prison Service and the Barbados Defence Force had to support each other, particularly during crises.

In addition, he added the standardized approach would also assist with the response when local agencies were called out to work with member states of the Regional Security System.

He explained that the objective of the Incident Command System training was to strengthen institutional arrangements for incident management within the prison system, and was part of the Regional Response Mechanism.

They were also able to strengthen coordination among departments in HMP Dodds and other national agencies in the disaster management system for the on-scene management of incidents.

“I would like to fully endorse the initiative of the Superintendent of Prisons and his management team for continuing to educate and train our prison officers through this education programme.

“It is said that ‘it is better to sweat on the training ground than to bleed on the battlefield’.  Your hard work will definitely save lives and protect property,” the Minister said.

Mr. Hinkson also gave the undertaking that Government would continue to support such initiatives to professionalize institutions, so that they would be better able to service Barbados and make the requisite contribution to its Caribbean neighbours.