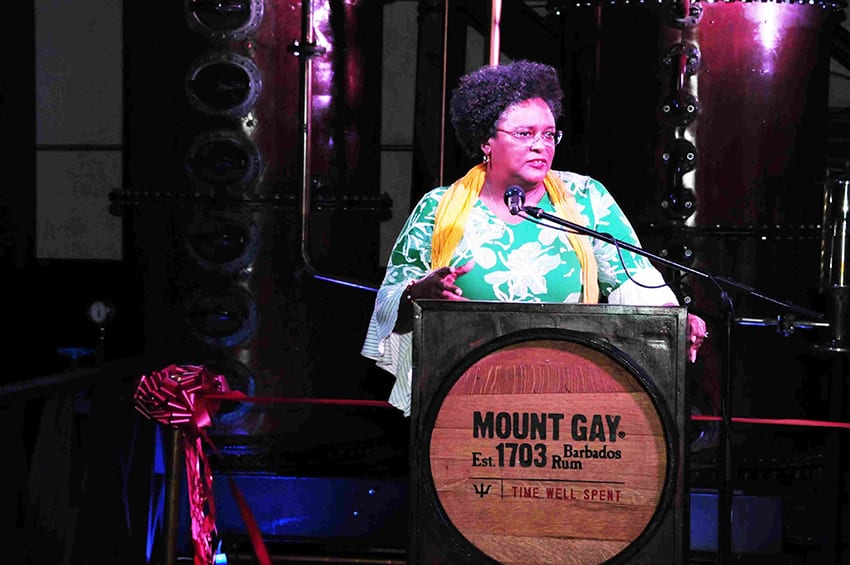 Plantation houses across Barbados need to be the subject of a deliberate plan, whether it is international business, as living museums or places for different types of activity as it relates to heritage assets for tourism.

Prime Minister Mia Amor Mottley made that charge last night, as she addressed the recommissioning of the Coffey Still at Mount Gay Rum in St. Lucy.

“That we can repurpose our plantations to help us secure greater stability in our financial and economic well-being is absolutely critical,” she said.

The Prime Minister stressed that repurposing the use of the plantation houses for her was significant because it would not be a case of “starting from scratch”. Rather, Ms. Mottley noted, it was more a question of taking what was done at the beginning and repurposing it so that it made sense.

Making reference to the recommissioning of the Coffey Still, the Prime Minister said rum needed to be the subject of what was happening.  She explained that it was an exercise that went from the planting of the canes to the distillation of the spirit.

The Prime Minister added that the once decommissioned still was repurposed and was producing value added to the company, not just in terms of the innovative ways chosen to blend the rum.

Rather, she noted that the management of the process from the growth of the canes to the production of the rum was one finite process and allowed them to charge more than they would otherwise have been able to because they were maximizing value in a way that the country was never able to maximize at the beginning.

“It tells the story of how we need to complete the process of what we produce…. So that instead of exporting the bulk product for limited value, we maximize the returns that are capable of being earned here, [and] the ability for us to be the place for the home that owns the entities is part and parcel of the Barbados exercise, she said.

Ms. Mottley added that there should be no difference in what was produced locally or internationally as Barbados must be considered a global hub for all enterprises.  That, she said, extended to even those that may have seen the country only as a place to post box mail registration rather than a place from which they can do business.

“We converge international business and domestic business because we have come now to accept that our business is the world, and the world is our business,” she pointed out.

The Prime Minister also noted that as Barbados embarked on a training and retraining exercise to become that global hub, it was important that all aspects be considered in the process.

Managing Director of the Mount Gay Distilleries Limited, Raphael Grisoni, said the Coffey Still was decommissioned in 1976, but a decision was made to reinvest and recommission it to create a “beautiful liquid”, and enhance the value of rum.

He added that the still would be named “The Blue Still”, in recognition of the dedication of longstanding employee, Senior Distiller Reynold “Blues” Hinds, who has worked with the company since 1965.