Pledge Of Continued Cooperation With Venezuela 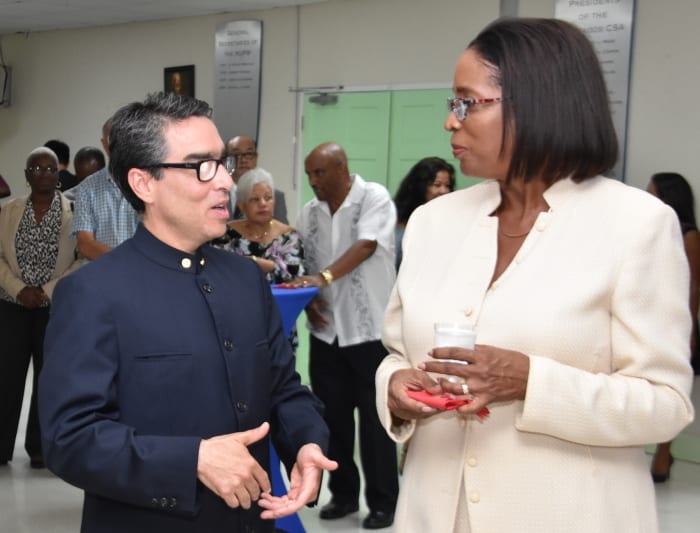 Minister in the Ministry of Foreign Trade, Sandra Husbands, in discussion with Venezuela’s Charge’ d’ Affaires, Alvaro Sanchez, at an event to mark Venezuela’s 207th anniversary at the Horatio Cooke Auditorium yesterday. (C.Pitt/BGIS)

The Government of Barbados has pledged to maintain cooperation with Venezuela on matters of mutual concern.

Minister in the Ministry of Foreign Trade, Sandra Husbands, made this declaration at an event held to mark the 207th anniversary of the Independence of the Bolivarian Republic of Venezuela, last night at the Horatio Cooke Complex, Dalkeith Road, St. Michael.

Mrs. Husbands stated: “Barbados is aware that the need to create closer hemispheric ties depends largely on the cooperation and collaboration among the countries in the hemisphere…

“To this end, Barbados pledges its on-going cooperation and consultation with Venezuela on matters of mutual concern with the aim of confronting the challenges that face us individually and as a region.”

The Foreign Trade Minister noted Venezuela and Barbados have enjoyed “friendly and productive relations” since 1969, when diplomatic relations were established.

She pointed to 11 bilateral agreements in the areas of technical cooperation, tourism, culture, taxation, trade and investment as proof.  She also highlighted Venezuela’s commitment to cultural exchanges and Spanish language training for public sector workers through the Venezuelan Institute for Culture and Cooperation.

“Such partnerships have been very useful and are to be commended and replicated,” she stressed, while congratulating Venezuela on its 207th anniversary.

Charge’ d’ Affaires of the Bolivarian Republic of Venezuela, Alvaro Sanchez, called upon both countries to “strengthen our bilateral relations and deepen our human contact”.

He pointed out that 2019 would mark 50 years of diplomatic relations between the nations and said he believed that the occasion would be “a great opportunity to work comprehensively towards more cooperation and integration”.