PM: Barbados Can Get Out Of Economic Situation 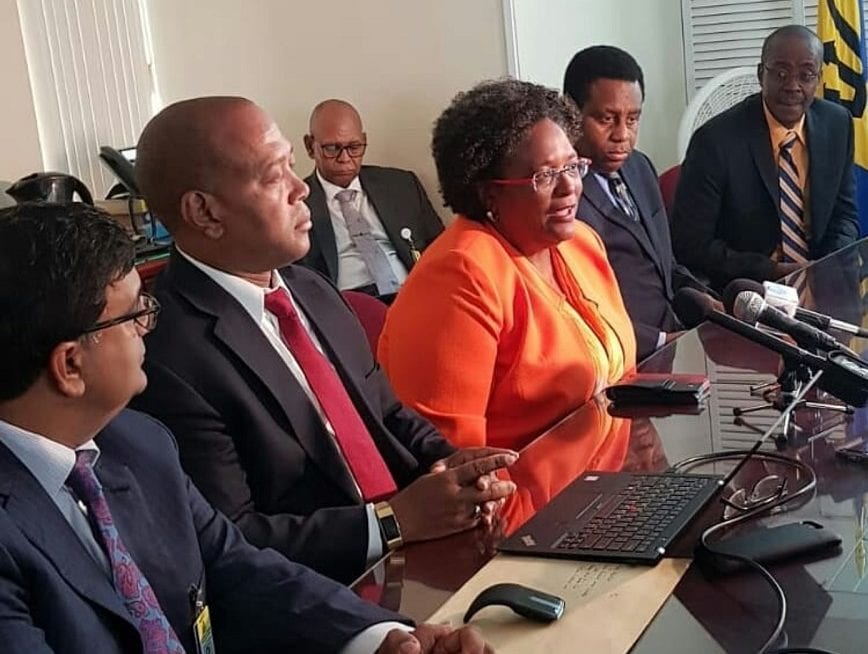 Prime Minister Mia Amor Mottley is confident that Barbados can get out of its economic troubles and become “fiscally fit”.

Ms. Mottley expressed this view on Thursday during a media briefing at Government Headquarters, at which she introduced five members of Government’s economic team. Subsequently, the team delivered a presentation on the Barbados Economic Recovery and Transformation (BERT) Programme.

Ms. Mottley said briefly before heading back to Cabinet: “If we pull together and we do the heavy lifting together as a people, I have every confidence that Barbados will come out of this stronger than we were and, above all else, fiscally fit and fit for purpose. If we are not fit, then we can’t make the long distances and the difficult rides…that will face us in the future.”

The Prime Minister recalled that back in July 2018, she and her team met with the Social Partnership and started a consultative process towards the beginning of phases two and three of the Barbados Economic Recovery and Transformation Programme.

“After meeting the Social Partnership, within our own parliamentary party we had a similar consultation and then we went to the public for Barbadians to have their say as to those institutions that they believe to be essential, highly desirable, optional, and optional [but] better delivered elsewhere,” she stated.

Ms. Mottley noted that the responses to that online survey were “phenomenal”. She disclosed that almost 5,000 people responded to the approximately 93 questions, and they took about 47 minutes to complete it.

“That is an amazing response from the people of this country. Since then, we have collated the responses of everyone and we were then able to start the second tier of consultations which started with the Social Partnership yet again, members of Cabinet [and] members of the permanent secretaries’ committee,” she explained.

Those members of Government’s economic team attending the media briefing were: Chief Economic Counsellor, Ambassador Dr. Clyde Mascoll, who is the lead negotiator with the International Monetary Fund; Special Advisor, Professor Avinash Persaud; Senior Technical Advisor to the Government of Barbados, Dr. Kevin Greenidge, who has been released from the IMF for two years; Governor of the Central Bank, Cleviston Haynes; and Director of Finance and Economic Affairs, Ian Carrington.

Ambassador Mascoll said the economic team had worked assiduously over the last couple of months to get to that stage, and proffered the view that the success of the journey so far could be attributed to the leadership of Prime Minister Mottley, who had “very wisely” chosen the team.