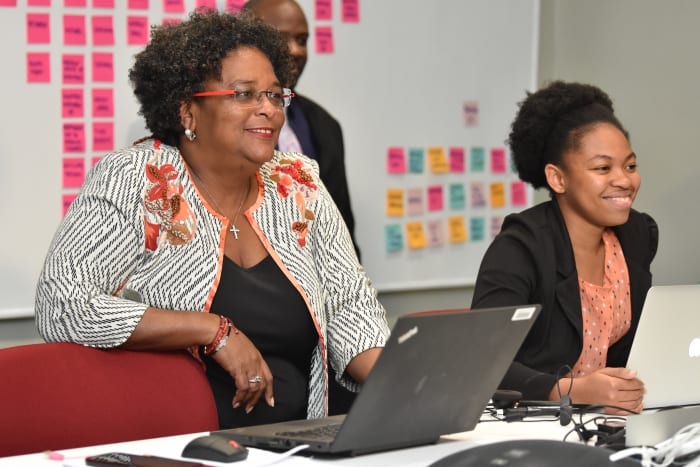 Barbados has to master technology if it is to move forward as a global player.

Prime Minister Mia Amor Mottley expressed this view on Wednesday, as she addressed the official opening of Warrens Great House, which was renovated by CIBC FirstCaribbean International Bank.

Ms. Mottley thanked the bank for using Warrens Great House not only for training, but as a centre that would assist in exploring the creativity of people in the region.

She told her audience that a project in coding would be introduced to train Barbadians from early childhood to nursery, 9 to 11, 14 to 16, and post-secondary children. She explained that over the course of three years, many Barbadian students and post-secondary persons would be exposed to the training.

“It is our duty, as we have said, to create global citizens but to route them in Barbadian values and traditions that are the best…. And, therefore, for you to repurpose this building in a way that allows for your ambitions for greater technological improvement to be met by our own aspirations, for our own people, is what I would call a win-win situation,” the Prime Minister stated.

She also said regional governments wanted to work with the banking sector to confront the issue of de-risking in a “very strong and meaningful way”.

Ms. Mottley added that Government was interested in working with the banks to improve its offerings to citizens. “We understand that many of our citizens have been affected by a decade of … no growth, but also of having to whittle down all of their savings just to keep above the water. We accept that banks are not in the business of wanting to hold real estate either, and therefore we have to find a way that allows our citizens, as was done in other countries, to be able to hold on to their assets while negotiating these very difficult and choppy waters.”

The Prime Minister noted that a house was the most important asset Barbadians would ever own. “They will truly do everything that they can to hold on to that house once acquired, and if they reach a point where they can’t hold on to the mortgage, it is because they simply more often than not have no options. So, we have to work together and to think outside of the box without necessarily affecting your balance sheet in a negative way,” she suggested.

The Prime Minister described the refurbished building as an amazing asset to Barbados’ heritage.