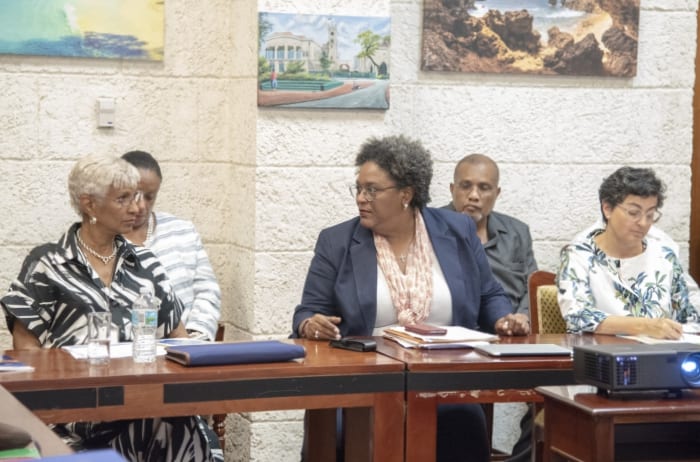 They were briefed by Executive Director of the International Trade Centre, Arancha González; her Chef de Cabinet and Chief Advisor, Matthew Wilson, who is also a former Barbados Foreign Service Officer, and Director General in the CARICOM Office of Trade Negotiations, Ambassador Gail Mathurin.

In welcoming Ms. González and Ambassador Mathurin, the Prime Minister underscored the importance of trade to Barbados’ economic recovery and transformation, and the need for Barbados to reemerge as a regional trade hub.

Ms. González is a trained lawyer by profession and is also an expert in international trade issues with 20 years of experience.

She also has extensive knowledge about international trade and economics and served as Chief of Staff to the World Trade Organization’s Director-General, Pascal Lamy, from 2005 to 2013. She also played an active role in launching the Aid for Trade Initiative.

Ambassador Mathurin represented the CARICOM Office in Trade Negotiations which is responsible for developing and maintaining a cohesive framework for coordinating and managing CARICOM’s external trade negotiations resources.