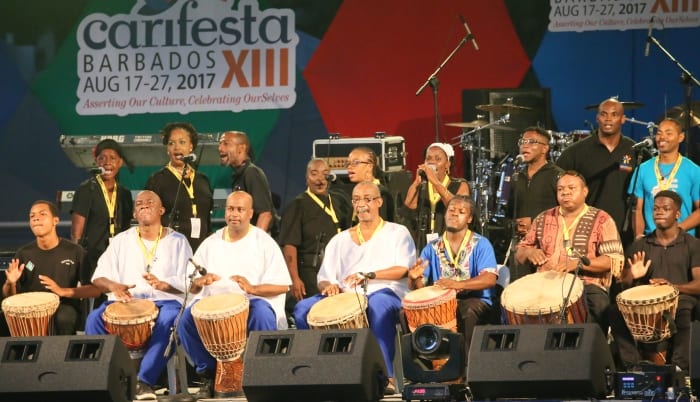 Prime Minister Freundel Stuart has described CARIFESTA XIII, held in Barbados from August 17 – 27, as being “a phenomenal success”.

Mr. Stuart noted that in any undertaking, whether small or large, challenges often appeared at the last minute to thwart even the best laid plans. He noted that in Barbados, nature intervened to test to the limits the logistical skills of organisers.

“Following the postponement of the opening ceremony and other arrangements due to the passing of Tropical Storm Harvey, accompanied by heavy rains, the necessary adaptations had to be made. It was nothing short of a miracle that the show went on, culminating in the fabulous and inclusive closing ceremony on Sunday evening.

“This reflected the true capacity of Barbadians, thousands of whom had been involved in CARIFESTA XIII. These included young people at all levels – visitor reception; transportation; hotel arrangements; site preparation; lighting, stage management and infrastructure; security and hospitality. There was significant participation in and attendance at most of the venues across the island in support of the 500 activities,” the Prime Minister stated.

He contended that the attendance and participation of several persons from CARICOM also reflected the faith of CARICOM countries in Barbados’ capacity to recover from Harvey’s hiccups. “Their skills left us in awe of the cultural reality and potential of the region,” he stressed.

Mr. Stuart extended heartfelt congratulations to the Minister of Culture, Sports and Youth, Stephen Lashley, and his team of officials; the CARICOM Secretary-General and the CARIFESTA XIII Secretariat.

He also commended the volunteers; sponsors and employees in the Public Service and private sector, as well as the thousands of participants from Barbados and the region, who contributed to the phenomenal success of the festival.

In addition, he thanked each and every individual, government department, members of civil society and corporate entities “for showing the world what Barbados is capable of”. He also expressed gratitude to the CARICOM participants for “demonstrating to the world the wealth of skill and talent that makes the Caribbean the most vibrant cultural centre in the world”.

The Prime Minister acknowledged that Barbados had learnt many lessons and gave the assurance that “we will put the valuable experiences to good use for the future growth of culture and the cultural industries of the region”.