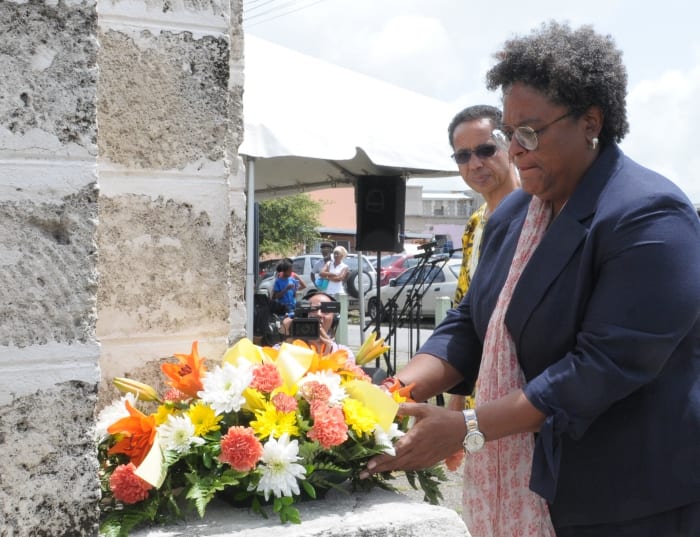 Prime Minister Mia Amor Mottley laying a bouquet of flowers at the Golden Square Monument today in observance of the Day of National Significance. Looking on is CARICOM Ambassador, David Comissiong. (B.Hinds/BGIS)

Prime Minister Mia Amor Mottley today hinted at the demolition of the National Insurance Building in Bridgetown as she articulated major development plans for Golden Square.

Speaking at the Golden Square site at a ceremony to mark the Day of National Significance, the Prime Minister stated: “…In the same way Clement Payne could not tolerate circumstances that literally choked the oxygen out of the people of this land, that building can no longer choke the oxygen out of the people who occupy and come through Bridgetown on a daily basis. It cannot be that something so derelict and so sick continues to occupy a prime place in this City, blocking from the view of others Independence Square, blocking from the view of others the beauty of Golden Square.”

Other neighbouring structures are earmarked for relocation, she revealed, “to give air and breath to this hallowed site called Golden Square”. And a major undertaking will be the erection of a wall which will bear the names of every family that has lived in Barbados and a monument to honour those whose names are not known, the Prime Minister disclosed.

She told her audience that she hoped that today would be the last day that the celebration of the Day of National Significance would be held “under two tents with less than 100 people” (in attendance).

She announced the establishment of a committee which will be mandated to consult with the wider public “on how to make this day more special in the minds and hearts of all Barbadians, and equally how this this site could be developed to give true expression to what a monument should be, and what we should reflect in the heart of our capital city as our honour to those who sacrificed and those who believed that a better day was possible.”

Ms. Mottley said that it was important that this attention be paid to Golden Square so that the children could understand the significance of the site, adding “it concerns me that three out of four young people I speak to don’t know what Golden Square is, far less where it is.