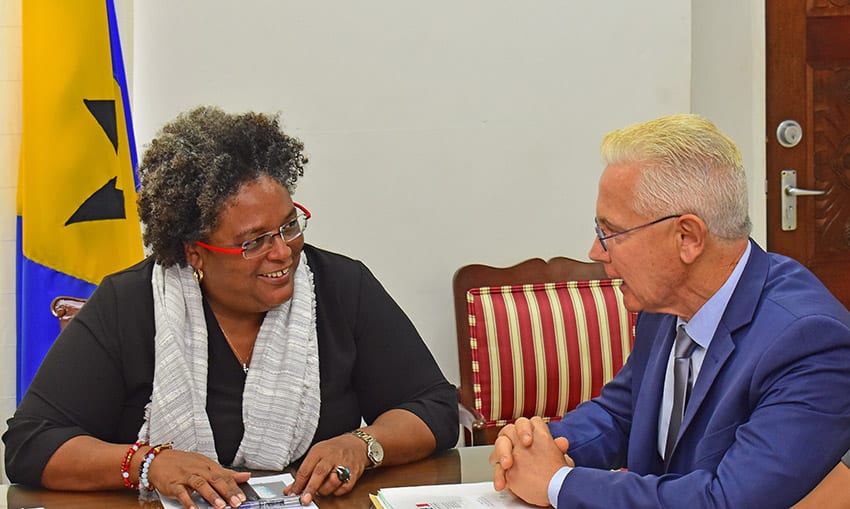 Prime Minister Mia Amor Mottley wants Caribbean states to join forces with countries outside the region to combat the challenge of climate change.

Speaking during a courtesy call with French Ambassador to Barbados, Philippe Ardanaz on Wednesday, the Prime Minister submitted: “We can’t continue to address disaster from the prism of CARICOM or island states only. There are also a number of states in the United States which are significantly affected by hurricanes as well as countries such as Mexico, Belize and Honduras.”

She proposed a conference of all the coastal states, and in the case of overseas territories, their parent countries, to come up with insurance as well as a growth and resilience fund to deal with the challenge.

“We will be moving to bring together the governors of these states and the leaders of these countries to determine the pool of resources we need to have and how do we support each other”.

Noting that the issue of climate change was fundamental to the region’s existence, Prime Minister Mottley expressed concern that the number of climate refugees would continue to rise in the region.

She noted that there were several examples of people fleeing Caribbean countries which had been battered by hurricanes and never returning. It is entirely possible, she contended, that a country which is struck multiple times might eventually be incapable of recovering, thereby becoming an abandoned state.

She invited the French Ambassador to join forces with Barbados in hosting the climate change conference which would speak to these issues.

Ambassador Ardanaz responded that climate change was also an important issue for his country and he updated the Prime Minister on plans for a conference to be held in Guadeloupe next year which would bring the region together to discuss the impact of Sargassum seaweed and devise ways to address it.

The two officials also discussed issues related to drug trafficking, airlift between Barbados and Paris, and the possibilities for teacher and student exchanges between the two countries aimed at boosting language skills.