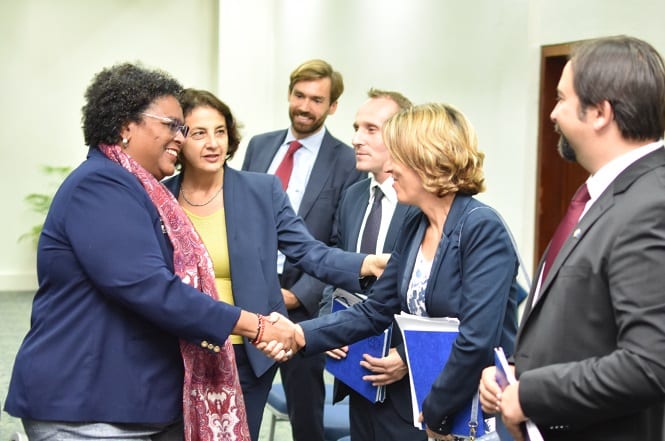 Prime Minister Mia Amor Mottley has received an extensive briefing from the EU on its existing and upcoming programmes, and how Barbados may benefit from them.

Ms. Mottley and several of her Ministers met recently with the EU’s Ambassador to Barbados, Daniela Tramacere, and her team, who made the comprehensive presentation on EU-funded Bilateral, Regional and Thematic Programmes.

During brief remarks before the presentation, Prime Minister Mottley said the follow-up meeting came out of a recent courtesy call with Ms. Tramacere. She explained that Barbados truly valued its relationship with the EU, which she described as mutually beneficial.

Underscoring the importance of the meeting, she continued: “There are some priorities that we may want to tweak, and hence the decision for us to look at the programmes.”

She disclosed that Minister in the Ministry of Economic Affairs, Marsha Caddle, who manages Barbados’ relationships with its international partners, would be given the critical task of liaising with the EU. She suggested that it was necessary to put in place a unit which would be dedicated to coordinating with the line ministries.

She added she would meet with the EU once quarterly to review the progress of each project. “I intend to do the same thing with the Inter-American Development Bank because unless we manage this concessionary funding properly, what has been our experience in the last decade will continue to be our reality, and I cannot afford for that to happen. Things that get measured, get done,” she stressed.

Ms. Mottley said Government was committed to the renewable energy sector and noted that its plans included shifting to a fossil-free environment by 2030. “Similarly, Minister Humphrey is trying to create the framework for a country that has taken for granted that its jurisdiction is made up, not just of land, but of an ocean that is 400 times the size of its land and needs to … benefit our people,” she added.

Ambassador Tramacere said the meeting was timely, and thanked the Prime Minister and officials for their prompt response. She agreed there was a need for a coordinator at the national level, so there could be follow-up of the programmes.