And at the end of the approximately one-hour tour of the Eric Holder Jr. Municipal Complex, they all remarked on how well the building was being maintained.

Prime Minister Mottley said: “I want to thank those who occupy these premises, the place is in a wonderful shape; and in Barbados where maintenance has been an issue for so many public buildings, it is refreshing to see….” She added that when the project was conceptualised, it was anchored with a maintenance programme and the benefits of such were evident.

She reiterated that through the Ministry of Public Works, Transport and Maintenance, Government was committed to the creation of a new framework by law to establish a sinking fund so that buildings could be maintained.

Ms. Mottley highlighted the fact that some of the workers at the facility lived in the parish and noted that institutions were often best served by people who had intimate knowledge and strong ties to the communities.

“This is an example of where we need to be going in the rest of the country in terms of allowing a more local touch and that is why the Government is intent on the creation of the People’s Assemblies, to allow for a greater devolution of our governance arrangements to the people who are affected by the services that are being provided to them,” she explained.

Ms. Mottley described the former AG as an illustrious Barbadian, who represents the best of this country’s values. “He has had a distinguished career in the US and is globally recognised as one of those citizens who has upheld the rule of law in this very difficult and challenging time in the world’s history,” she stated. 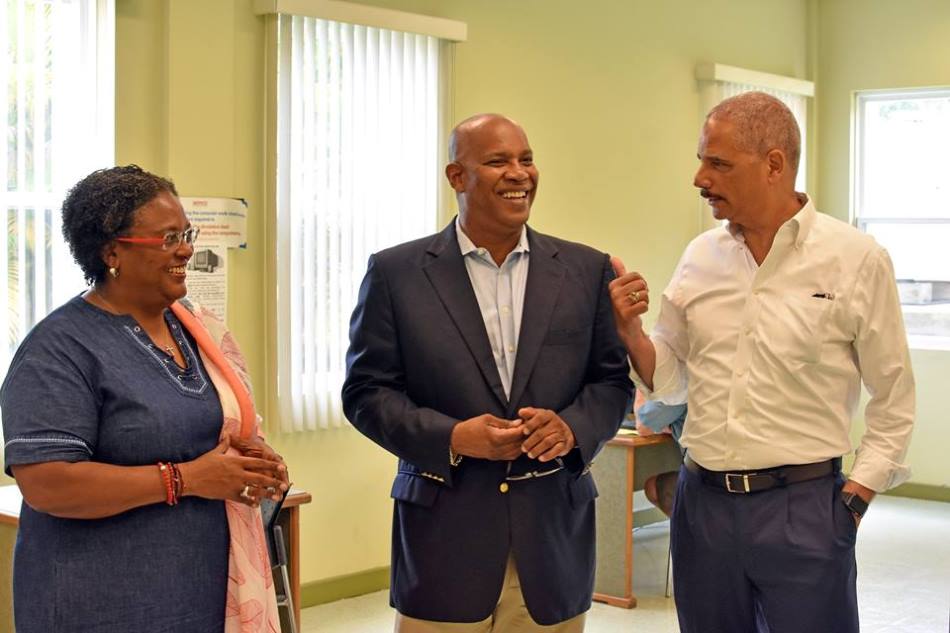 Mr. Holder said he was pleased to be in Barbados and at the complex he dedicated nine years ago. He continued: “It is nice to see how wonderfully maintained this is and how important this is to this community.”

He stated that Prime Minister Mottley and the Attorney General were engaged in a serious process that would help this nation deal with the problems that confronted them when they came to office.

“I have great confidence in her abilities; she is not only a colleague I respect, she is a friend and I think Barbados is indeed very lucky to have her leading this great nation,” the former Attorney General stated.

Attorney General Marshall thanked Mr. Holder for his interest in the public library, describing it as “one of the finest assets” of the complex. He continued: “I know that you have indicated an interest in giving tangible support to the use of that library, especially by our younger children, and I look forward to engaging with you further on that particular exercise.”

Mr. Holder is vacationing in Barbados and leaves the island later this week.