Ms. Mottley made the comments today after a meeting with President of the IDB, Luis Alberto Moreno, and his team, at Government Headquarters.

Describing the meeting as “very good”, she reported, however, that Barbados had not been good over the last few years with respect to disbursement.

“There were five loans that were cancelled with the bank between 2016 and 2017. I am not sure how a country that needs concessional funding can engage in the luxury of having loans cancelled and we have promised that that has to be a thing of the past, that we need to be able to reposition our country.

“Our disbursement rate regrettably is among the lowest, if not the lowest in the hemisphere, at 13 per cent. Jamaica’s is at 32 per cent and that gives you an idea of where the disparity lies between Barbados and some of the other countries in the region,” the Prime Minister stated.

She explained that Barbados has a loan portfolio with the IDB of US$191 million, and 135.7 million of that amount remains undisbursed, in spite of the fact that many of these loans were in place for three to five years.

She added that as a result, at least three major loans were at risk and Government and the Bank had agreed to “put them in good shape again”, even if it meant tweaking them.

“I refer to a loan to strengthen human and social development in Barbados, 90 per cent of that remains undisbursed and that loan was signed since September 2015. The Road Rehabilitation Programme, which is US$25 million and US$24.7 million, remains undisbursed. In other words, we spent US$300,000 even though that loan was signed in November 2015, and I am sure Barbadians would be surprised given the state of our roads today.

“The deployment of cleaner fuels programme and renewable energy in Barbados, which is US$34 million and US$32.2 million, remains available and not disbursed even though that loan was signed almost two years ago,” she stated. 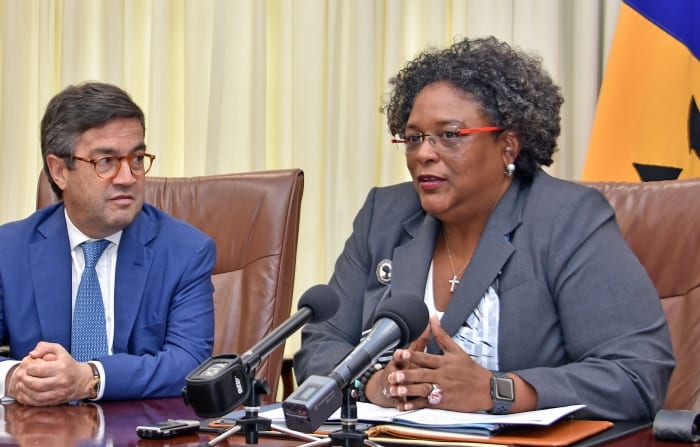 Ms. Mottley disclosed that the Minister of Economic Affairs and Investment, Marsha Caddle, had been given the responsibility of getting those loans fully functional and increasing the disbursement ratio.

She pointed out that during the talks, they agreed that there was a need for them to be able to better monitor the delivery of the loans. She reminded that Barbados was preparing to enter into negotiations with the International Monetary Fund (IMF) and that the IDB President was already in discussions with the Fund about that matter.

She stressed that as the country goes forward in the next few years, its major sources of funding would be concessional funding from the international and regional financial institutions.

The Prime Minister disclosed that the IDB had Special Development Lending which it would make available to the country upon settlement of an agreement with the IMF. “That two per cent of GDP, on top of whatever agreement we reach with the IMF, is going to be important in helping us to finance our way, in terms of Government’s programmes,” she stated.

In addition, Ms. Mottley noted that the Bank had a credit contingent facility mechanism in the event of a hurricane or natural disaster.

She explained that the Bank would disburse two per cent of GDP in credit to allow the country to move expeditiously to meet its immediate needs. She pointed out that the country would have access to almost $200 million within days of a natural disaster to meet any immediate needs.

President of the IDB, Luis Alberto Moreno, said there would be a lot of work but his organisation was keen to assist. He stated that he had several discussions with Ms. Mottley about the way forward.

“She and I discussed along the way many times the need to … bite the bullet and do some of the things that she is embarking on for the good of all of the people of Barbados. When I saw that, it was my immediate reaction to get on the phone and to say, we are here to help, because when leaders take those kinds of decisions, when they decide to confront the issues of a country, they deserve all the help and all the friends.”

Mr. Moreno stressed: “This is an effort where everybody has to chip in…. We realise as she [the Prime Minister] does, that there are people in Barbados who are going to be suffering that require a response and in that regard, we will be working on ways to help in those social safety nets.”

He pointed out that he recently met with the IMF’s Managing Director, Christine Lagarde, and they talked extensively about how they could help Barbados in this challenging time. He added that he was convinced that as they go forward, the IDB’s role would be more than supporting balance of payment issues, but also about development issues of the country.