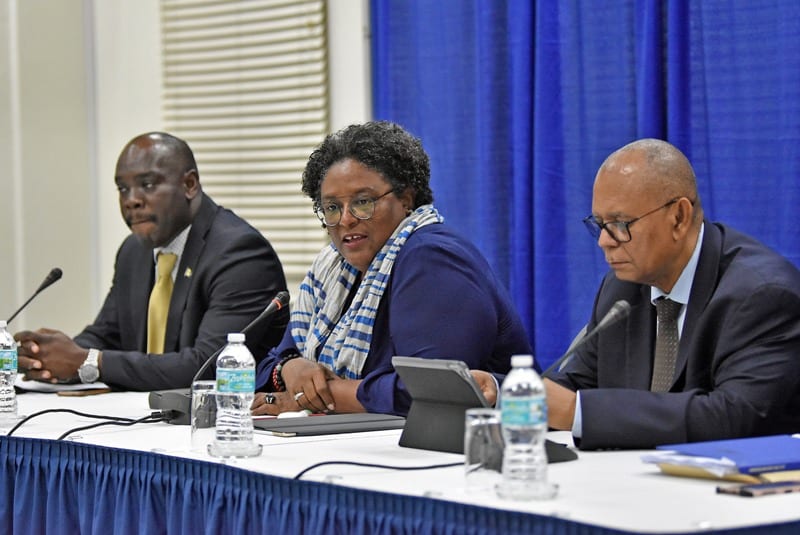 Prime Minister Mia Amor Mottley making a point at the meeting to discuss financial reporting requirements while Minister in the Ministry of Finance, Ryan Straughn; and Director of Finance and Economic Affairs, Ian Carrington; listen. (C.Pitt/BGIS)

Prime Minister Mia Amor Mottley has told accounting officers in the public sector and principals of State-Owned Enterprises (SOEs) that their financial reporting data must be up-to-date.

Emphasising the importance of improvement in this area, she said Barbados could no longer continue on the current path with dated data.

“We have to be able to move to real-time data with respect to our revenue and expenditure…. We have to do a reporting going forward that requires us to be in a position within a week to two weeks to provide data to other entities. But that is not why we need to improve; we need to do it because we need to become fiscally fit and we are far from being fiscally fit,” she stated.

Ms. Mottley stressed that Government needed to move to a situation where relationships could be managed rather than just transactions. She insisted that for such things to happen, Government must have access to real-time data from departments and, more importantly, state-owned enterprises.

She noted that having real-time data would assist Government in being able to make decisions to better deal with its cash flow and control its liabilities. She continued: “We need to ensure that the quality and integrity of the data being supplied on an ongoing basis is such that we can appropriately make decisions and report where we have to report without fear of contradiction.”

The Prime Minister said her Government had given a commitment to the country that it would not ask taxpayers for money if it was not prepared to account for how it had been spent. She stressed that audited accounts and reports would be laid in Parliament.