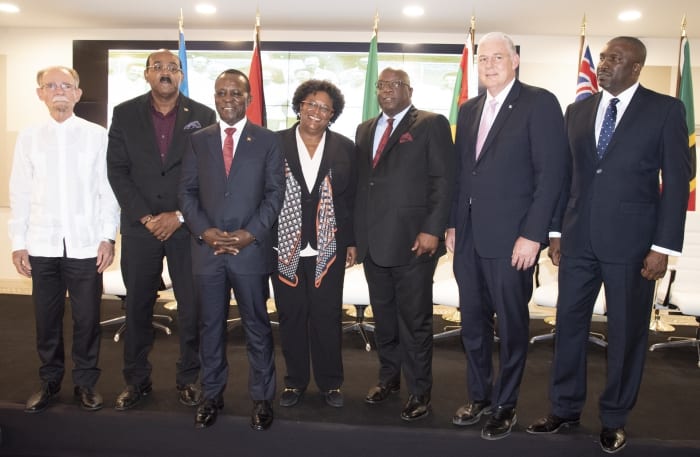 Prime Minister Mia Amor Mottley will lead a delegation to this year’s Thirty-Ninth Regular Meeting of the Conference of Heads of Government of the Caribbean Community (CARICOM) in Montego Bay, Jamaica, from Wednesday, July 4, to Friday, July 6.

As a newly elected leader, Ms. Mottley will also deliver one of the keynote addresses at the opening ceremony, which gets under way on Wednesday, July 4, CARICOM Day, at the Montego Bay Convention Centre, beginning at 4:00 pm.  A reception will follow immediately after the opening ceremony.

Following the adoption of the Agenda, Prime Minister Mottley and her CARICOM colleagues will have several items to consider at the three-day conference, including the CARICOM Single Market and Economy, for which she has lead responsibility; matters from the Council for Finance and Planning; Making the CSME More Effective, and a Legal Opinion on the Entitlement of Haitian Nationals to an Automatic Stay of Six Months upon Arrival in CARICOM Member States.

When regional leaders meet in caucus, they will examine Security and Border Issues; relations between Belize and Guatemala and Guyana-Venezuela; Matters Related to the Caribbean Court of Justice, including the CCJ’s Pensions Rules 2017; and the Constitutional Relationship of the Overseas Territories and the United Kingdom.

CARICOM Heads of Government will also consider a number of reports, namely the Report of the Marijuana Commission and the report of the Commission to Review Jamaica’s Relations within CARICOM and CARIFORUM Frameworks.

Other agenda items are: Building Resilience (Disaster Resilience in the Caribbean Community Post-Hurricanes Irma and Maria); and Approval of Draft Declaration on Climate Change; Delegation of Authority to the Community Council on Matters Related to the Issue of the CARICOM Laissez-Passer; a CARICOM Regional Strategy for The Development of Statistics; and the Third United Nations High-Level Meeting on Non-Communicable Diseases.