PM: No Devaluation Of Barbados Dollar

There will be no devaluation of the Barbados dollar!

This was the strong message from Prime Minister Freundel Stuart today, as he delivered the feature address at the January 2017 business luncheon of the Barbados Chamber of Commerce and Industry at the Hilton Barbados Resort.

Mr. Stuart told the packed room that there was no persuasive evidence that devaluation exercises in other CARICOM countries had produced any spectacular results or facilitated the outcomes they desired. “Put very simply, devaluation of the Barbados dollar is not an agenda item for the present Government,” he emphasised.

The Prime Minister said that in the face of real growth in the traded and non-traded sectors; noticeable improvements in the balance of payments; falling inflation and declining unemployment; “pundits, publicists and prophets” had been steadfastly predicting a devaluation of the Barbados dollar or had been calling stridently for a programme with the International Monetary Fund (IMF) or for privatisation of some of Government’s assets.

He pointed out, however, that as long as the island continued to depend on its relationship with the world for economic sustenance, there would be fluctuations in its fortunes, depending on what was going on in the economies of its trading partners.

“So, it cannot be that every time there is an adverse movement in our foreign exchange or foreign reserves situation, whatever the reason, the only solution to put forward is that we should devalue the currency of Barbados,” he stressed.

During his wide-ranging address, Mr. Stuart said he did not judge that there was a need, at this time, to seek balance of payments support from the IMF. “Our present circumstances in the Government’s view, while requiring close attention, do not warrant a panicky resort to the IMF,” he underscored. 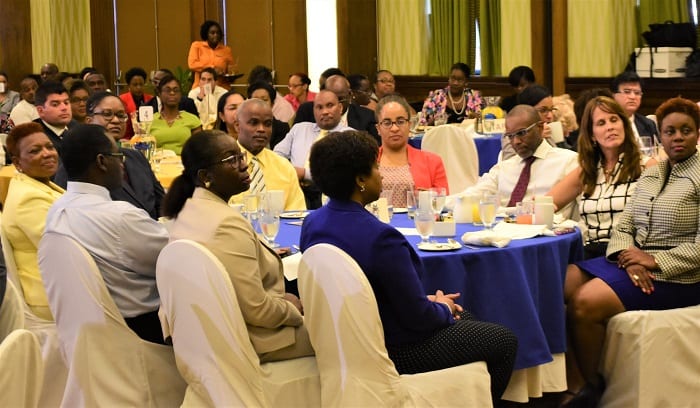 Members of the audience listening to the Prime Minister’s feature address at the Barbados Chamber of Commerce and Industry’s luncheon at Hilton Barbados today. (C.Pitt/BGIS)

The Prime Minister noted that Barbados had recorded a decline in its reserves reported for 2016 over 2015, but said his Government was not pushing any “panic buttons”, as some people seemed to believe they should.

“The most recent Central Bank report showed that foreign exchange reserves ended 2016 at 10.2 weeks of cover. We have all accepted that ideally at least we should maintain a minimum of 12 weeks of import cover. It does not mean that what we have in reserve is insufficient to meet our current daily requirements or in fact to defend our existing currency peg to the US dollar.

“Suggestions to the contrary are unnecessary speculation which quite frankly ignores the economic history of Barbados of which I have just spoken. In the early 1990s when Barbados last faced a challenge of a similar nature, we practically ran out of reserves, as we almost ran out of options. On this occasion we are not nearly close to running out of either reserves or options,” he explained.

Mr. Stuart added that over the coming days and weeks those reserve levels would almost certainly be boosted by at least $250 million, as the delayed inflows associated with the Sam Lord’s reconstruction project; the First Citizens/CAF sponsored bridging loan for the upgrade of the Barbados Revenue Authority and Customs; and the completion of the arrangements for the sale of the Barbados National Terminal Company Limited, come in.