PM Not Happy With Execution Of Exercise 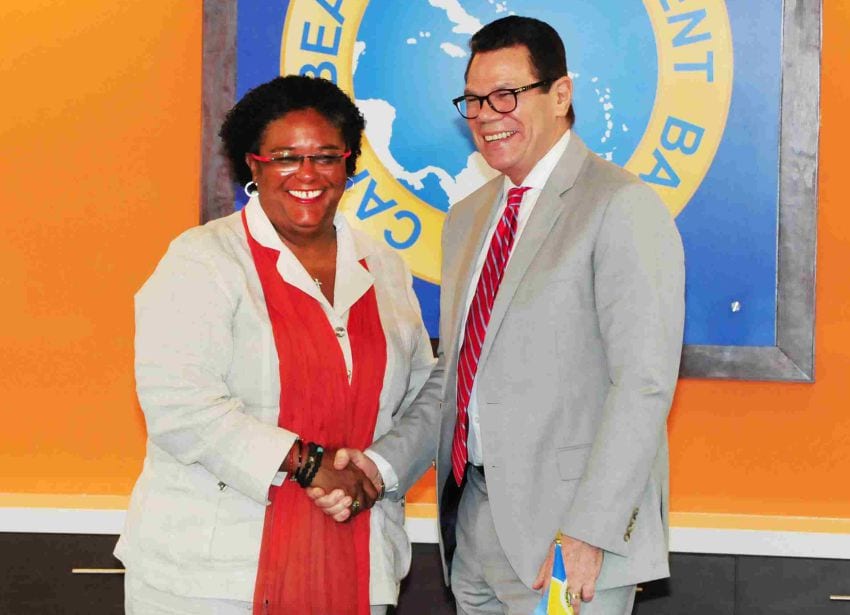 Prime Minister Mia Amor Mottley has again expressed disappointment with the way in which the retrenchment exercise in the public service is being executed.

Ms. Mottley made the comments today in response to a question from the media during a brief ceremony for Government and the Caribbean Development Bank (CDB) to sign a policy-based loan.

The Prime Minister said: “Am I happy with the manner in which the retrenchment is being executed? No, I am not and I have said so to the public service and to the head of the public service. But I also understand that there are a number of reasons, some good and some bad, as to why it is being undertaken in this way. I regret that we have found a situation in the structure and function of the public service that does not match what we left a decade ago with respect to systems and we have to review these systems going forward….

“We have also to recognize that even though I am not happy, I am conscious that I have set very, very, very, very high standards. Those standards I have set with respect to persons being able to go home with…cheques have been met in a number of departments, but regrettably, it has not happened in all and to that extent, therefore, I am not happy.”

Ms. Mottley noted that in 2014, some retrenched public servants had to wait for a while to get their cheques. She stressed, however, that this would not happen in this instance, adding that it was not beyond the capacity of persons to work out the amounts.

“The only difficult one is to work out the vacation pay because with the ‘Last In, First Out’ process, the persons are being chosen, not by name, but by date of hire and if you know the date of hire and the date today, then you can work out the length of period and hence you can compute the severance-type conditions,” she explained.

Ms. Mottley reiterated that agreeing to retrenchment of workers was the hardest thing she has had to do in public life. “But I understand that it is absolutely critical to the country for our stability and for our ability to transform. That is why we are going to work hard to make sure that we can reabsorb, retrain, give people access to land, give people access to vendors’ licenses and we are trying to put in place all of these things over the next few months…. What they [the displaced workers] go home with, should be able to tie them over for two or three months while we put these other things in place,” she stated.

The Prime Minister gave the assurance that Government would get the work done. She said she had told the country it would be a difficult period but in her view, what is happening now “is going to be as hard as it gets”.

She continued: “We are on course in every respect with what we set out with respect to the debt restructuring, we are way ahead with respect to the agreement with the International Monetary Fund, and now this agreement with the Caribbean Development Bank. We hope we will have some good news from the Inter-American Development Bank in a few weeks’ time. We are on target with the legislative reforms.”

Ms. Mottley stressed that the policy-based loan with the CDB was important and it sent the message that in spite of the difficult decisions, all the indices necessary to show that the country was on track and on its way to being able to secure a bright future for its people were in place.