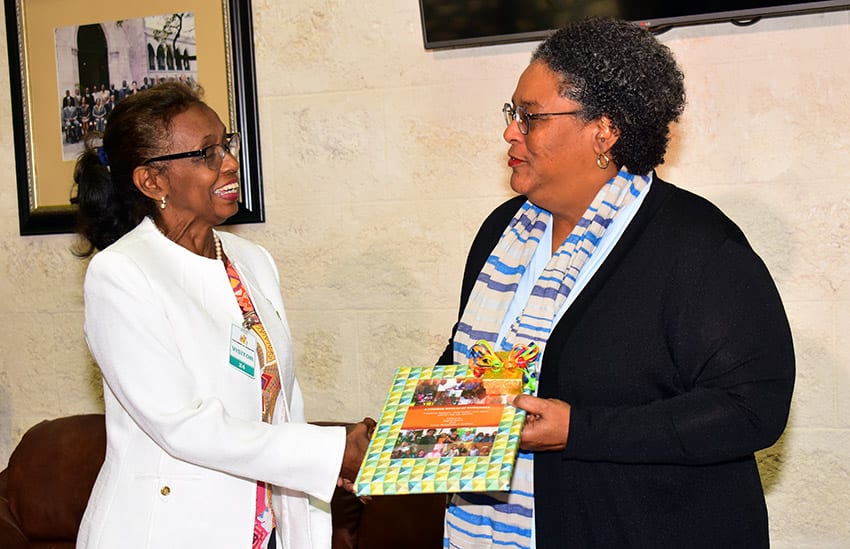 Prime Minister Mia Amor Mottley stressed the importance of the Commonwealth today as she was presented with a copy of the book: A Common Wealth of Experience, in the Ermy Bourne Committee Room, Parliament.

The Prime Minister said the Commonwealth represents that entity which speaks to diversity, tolerance and respect.  She continued: “You can’t have over 60 countries across the world from different backgrounds…and not have diversity.  At the very time, the world is…undermining multilateralism and diversity, the Commonwealth potentially has the ability to be that counterpoint to what is happening in the world.

“Regrettably, it does not have, and has not exercised the force that it can.  I can only hope that it will find within its member states and within itself as a collective, the power to summon that voice and to forge that action that is critical to protect the small, the vulnerable and those who would not otherwise be recognized at the global community; those who are invisible and those who would be viewed as dispensable and disposable.”

Trustee of the RCS, Barbados Branch, Miles Weekes, explained that in 2017, the Commonwealth Association of Aging organized a Story Telling Project and young people between the ages of 15 and 24 living the Commonwealth were encouraged to spend time with persons 80 years and over in their countries.

He pointed out that the young people recorded their untold real life stories and the best 50 essays selected by the editorial team were published in the special book. Five essays, he stated, were submitted from Barbados, and they were all considered worthy for inclusion in the book, which has been dedicated to older people everywhere.

Mr. Weekes said the project was important because it allowed information to be transferred.  Stating that the Commonwealth was 70 years old, he stressed that it was necessary to transfer its values to younger people, so they too could continue to pass them on to generations.

“Our belief in the Royal Commonwealth Society is that if those same principles were adhered to by people on an individual level, we would have a much better society. Therefore, the intent of all the work that we do is to try to pass on to the younger people what those values are, and to get them to live them as part of their lives,” he surmised.