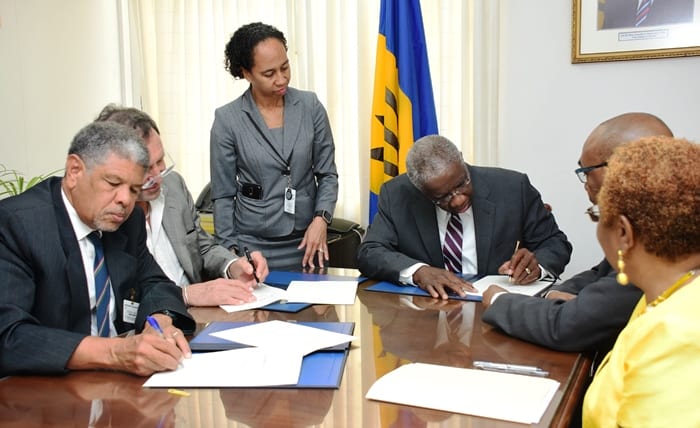 Prime Minister Freundel Stuart signed a Memorandum of Understanding with representatives of the Maria Holder Memorial Trust and the Brewster Trust last Monday aimed at facilitating the philanthropic work being undertaken by the charities in Barbados.

Prime Minister Stuart thanked the organisations for “the excellent work” they were doing, citing the scale and high quality of the projects, including the Maria Holder Diabetes Centre at Warrens; nursery schools at Gall Hill, Christ Church; Oldbury, St. Philip  and Sharon, St. Thomas; as well as work done on the Farrs Children’s Home in St. Peter. He also mentioned work currently being done at the St. James Cemetery.

He praised the Trusts for their tenacity and commitment to the island, noting that these projects were at no cost to Barbados. Instead, he said, they were the result of a love for Barbados and the wish of the late Maria Holder to see the island’s development optimised.

Michael Russell, who along with Peter Symmonds, represented the Trusts at the signing ceremony, said that the goal was to continue “to do good things” for the island, and he thanked the Prime Minister and his team for their assistance in “lowering some of the barriers that we have been confronted with”.

He gave the assurance that all the savings which the Trusts had realised, as a result of concessions granted, had been ploughed back into the projects.