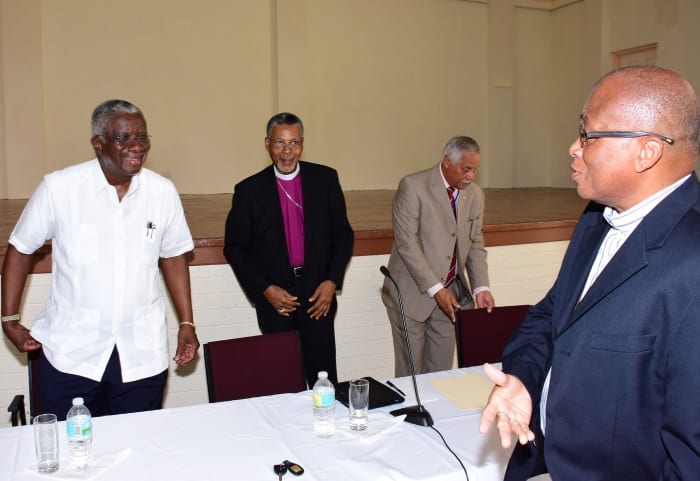 Prime Minister Freundel Stuart believes the time has come for a more relevant debate on gun violence and illegal drugs in the society.

Mr. Stuart proffered this view today as he addressed the Diocese of Barbados’ National Consultation on the Barbadian Family, at the Ivan Harewood Centre at the Christ Church Parish Church.

The Prime Minister told the packed room, which included the clergy from other denominations: “The Church and the State have to come together to see how best we can frame a dialogue on the issue. But, also to see how best we can come up with solutions to some of the challenges posed by a sense of alienation of those who are involved that makes them easy candidates for recruitment to that nefarious drug trade.”

Stating that it was a very small circle of people involved in those illegal deeds, he pointed out that their activities, however, could have profound and troubling consequences for the society. He suggested that this challenge would require all resources to be mobilised to confront it.

“The Government stands ready to work with the Church because it is causing immense pain to our families, and unless we can emit rays of hope to our people, in terms of how best we can get this problem brought under some kind of control, the family will continue to be put under pressure,” he contended.

Mr. Stuart stressed that families at the low rungs of society were not the only ones being affected, but those across all of the social strata. “This is a concern to which we must address our minds if we are to ensure that we have secure families,” he stated. He noted that while persons were pronouncing on the illegality of fire arms and the trafficking of drugs, it was probable that a “dialogue of the deaf” was taking place.

“While we are discussing crime, the people we are talking about are discussing work. This is how they put food on their families’ tables; this is how they get some of the luxuries that we who occupy mainstream society enjoy. As far as they are concerned, it is alright for us to talk because we are comfortable where we are, but if the society is pushing them to the margins they too have to survive and this is their way of surviving….

He suggested that unless societies develop the capacity and flexibility to respond to the diverse needs and aspirations of people, there would be profound difficulty in fighting and winning this battle.

Mr. Stuart said the State has recognised the need to protect and stabilise families, as well as promote family life. He pointed to various pieces of legislation which were designed to ensure that appropriate recognition was accorded to the family.

He surmised that if an objective evaluation of the last 50 years was completed, one would concede that substantial progress had been made in that regard.

The theme of the consultation is: Restoring Our Barbadian Family.