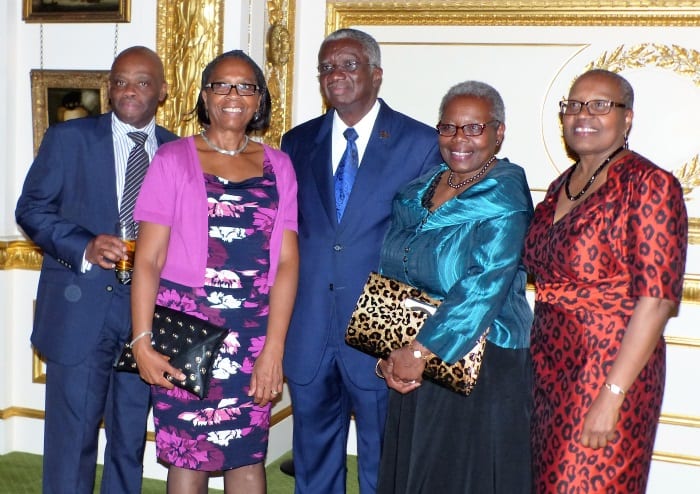 Prime Minister Freundel Stuart with some of the heads of Barbadian organisations who were present at the reception. (Photographs courtesy of Tyrone Roach)

Discussions about Barbados took centre stage when Prime Minister Freundel Stuart attended a reception last Thursday, as part of the activities hosted by the High Commission in London to celebrate the island’s 50th anniversary of Independence.

The reception at Lancaster House, where the negotiations for Barbados’ Independence took place, was attended by diplomats from the Caribbean and the Commonwealth, Buckingham Palace, heads of Barbadian organisations and friends of Barbados.

Mr. Stuart also joined officials at Keble College, Oxford University, at a commemoration ceremony to recognise the outstanding service of the late Sir James Cameron Tudor, KCMG, one of the Caribbean’s most influential diplomats and politicians. Sir James read for a degree in Modern Greats at Keble College, and, in 1942, he became the first black person to be elected President of the Oxford Union.

The Prime Minister later presented a citation for Sir James Cameron Tudor to the Vice Chancellor, Professor Louise Richardson; and Warden, Sir Jonathan Phillips, of Keble College. In the citation, Sir James is described as “a man of impressive intellect, a persuasive debater, and a skilled mobiliser”.

During his visit, Prime Minister Stuart also renamed the Chancery as “Barbados House”; reflected on the life of the Right Excellent Errol Walton Barrow, during the book launch for “Fathering a Nation” and delivered the feature address at an Independence Awards Gala for the Barbadian Diaspora.