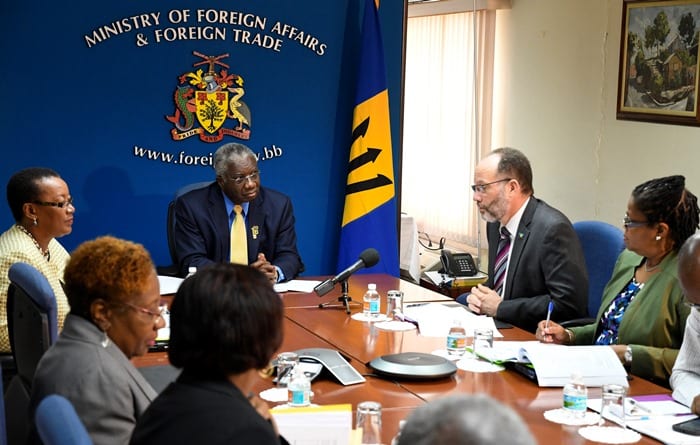 Mr. Stuart, who is the Chairman of the Prime Ministerial Sub-Committee on Reparations for Native Genocide and Slavery, received a progress report on the reparations efforts, and suggested several approaches to advancing the region’s agenda.

Ambassador LaRocque stated that some progress had been witnessed since the last Prime Ministerial Sub-Committee meeting, and noted that several of the National Committees established around the region were “mostly active and eager to move forward”.

CRC Chairman, Professor Sir Hilary Beckles, who is also the Vice Chancellor of the University of the West Indies, remarked that the example set by the CARICOM Heads of Government in creating the Commission had created “a global tsunami”, resulting in the creating of 17 other reparations commissions worldwide.

He offered the view that the reparations movement would be “the uniting force” in the next phase of civil rights in the United States, and suggested the need to link reparatory justice to the economic and social development of the region.

The CARICOM Reparations Commission was launched in 2013 with the mandate of establishing “the moral, ethical and legal case for the payment of reparations by the Governments of all the former colonial powers and the relevant institutions of those countries, to the nations and people of the Caribbean Community for the crimes against humanity of native genocide, the trans-atlantic slave trade and a racialised system of chattel slavery”.

Its work is overseen by the Prime Ministerial Sub-Committee, which also comprises the leaders of Guyana, Suriname, St. Vincent and Haiti. To date, National Reparations Committees have been established in Antigua and Barbuda, The Bahamas, Barbados, Belize, Dominica, Guyana, Jamaica, St. Kitts and Nevis, St. Lucia, St. Vincent and the Grenadines, Suriname and Trinidad and Tobago. The chairpersons of these committees sit on the CRC. 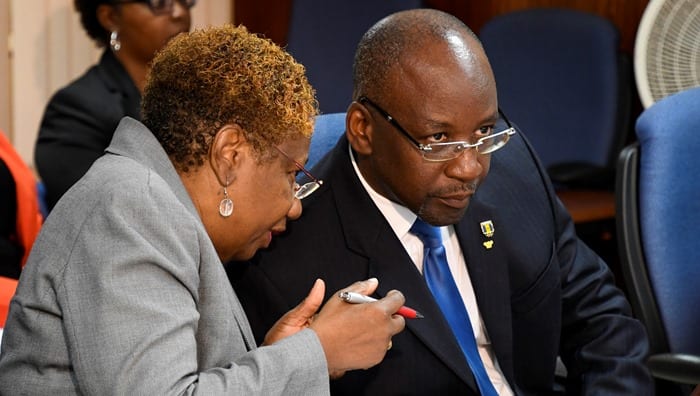 Permanent Secretary in the Prime Minister’s Office, Sonja Welch, confers with Minister of Culture, Stephen Lashley, during the meeting. (RB/BGIS)​

Ambassador LaRocque was accompanied by Programme Manager for Culture and Community Development at the CARICOM Secretariat, Dr. Hilary Brown; and Adviser on Communications, Leonard Robertson.