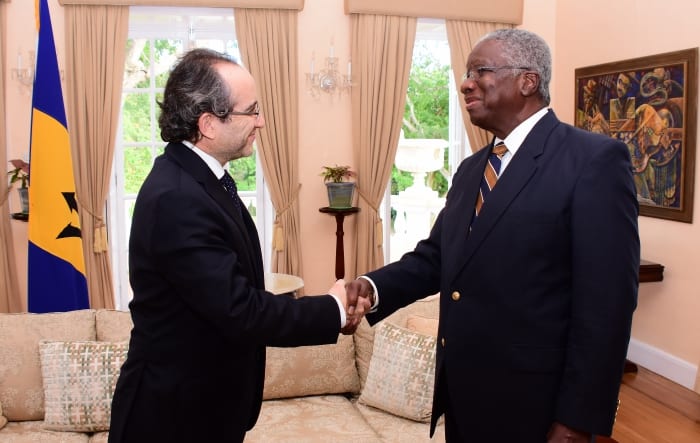 Israel could be providing assistance to Barbados’ agricultural sector in the future.

This was one of several areas raised recently when Prime Minister Freundel Stuart met with the State of Israel’s Ambassador to Barbados, Gil Artzyeli, at Ilaro Court.  Mr. Stuart said he was attracted to Israel’s Agricultural Center of Excellence concept, especially since this country has to “sophisticate” and improve its production techniques.

“Our food import bill is frighteningly high and we have to correct it; so working closely with Israel on such a project, which enhances food security, will be necessary,” he stated.

The Government of Israel has worked with India to create a number of Agricultural Centers of Excellence to share best practices and know-how, thus providing a suitable platform for a rapid transfer of technology to the farmers.

Ambassador Artzyeli disclosed that 60 centers were now operating in India, and pointed out that the results were outstanding, with farmers being able to increase their yields. He added that each center was tailor-made to suit the needs of the country.

Mr. Stuart stated that Barbados and Israel’s relationship dated back to August 1967, and said he looked forward to a deepening of the friendship.  He pointed out that over the years Barbadians had benefited greatly from access to scholarships granted by Israel and taken full advantage of them.

He added that he looked forward to the continuation of such training opportunities for the citizens of this country.

Noting that over the years Barbados had relied on fossil fuel, but the oil prices were spiralling out of control, the Prime Minister said the country’s focus was now on renewable energy, and Israel’s expertise in that area would be welcomed.

“We have an aggressive programme of energy efficiency and renewable energy under way and we want to benefit from a collaborative relationship on issues such as this,” he said.

He added that there were many areas of potential collaboration and opined that it was necessary to build on what was there before and explore new ones.  He identified information and communications technology, as well as water management as possible areas for cooperation.

Ambassador Artzyeli stressed that Israel had positioned itself as a leader in those areas discussed, and expressed a willingness to assist this island.

Those present during the courtesy call included Second Secretary, Idan Bismuth, and member of the Hebrew Community Central Council and prominent member of the Jewish community in Panama, Ramy Attie.