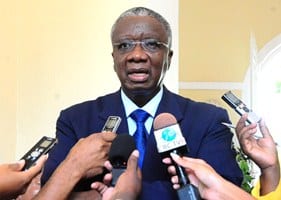 No Barbadians are being detained under the new immigration policy being implemented by the United States (US).

Prime Minister Freundel Stuart gave this assurance following media reports that 19 Barbadian nationals had been held as part of a crackdown on immigration authorities in the US.

Mr. Stuart explained that investigations with Barbados’ Consulate-General in New York revealed that the claim was untrue.

“The Foreign Minister received information that 19 Barbadians had been detained. The information did not come from the Consulate itself, it came from a Barbadian living in New York, so we asked the Consulate there to investigate the matter and we received a reply today that the news was fake,” the Prime Minister stated.

He continued: “They said they did a thorough investigation and if Barbadians were detained or going to be deported, the [US] authorities would consult or contact the Consulate. They said they had received no such contact, there was no consultation with them, and all of their investigations failed to turn up any information that would suggest that Barbadians in New York or any other part of the United States were in trouble as a result of any rounding up of people to get them out of the country.”

On January 27, the United States issued an Executive Order intended to protect the United States from the entry of foreign terrorists. That “travel ban” has been halted by the US Court of Appeals for the time being.