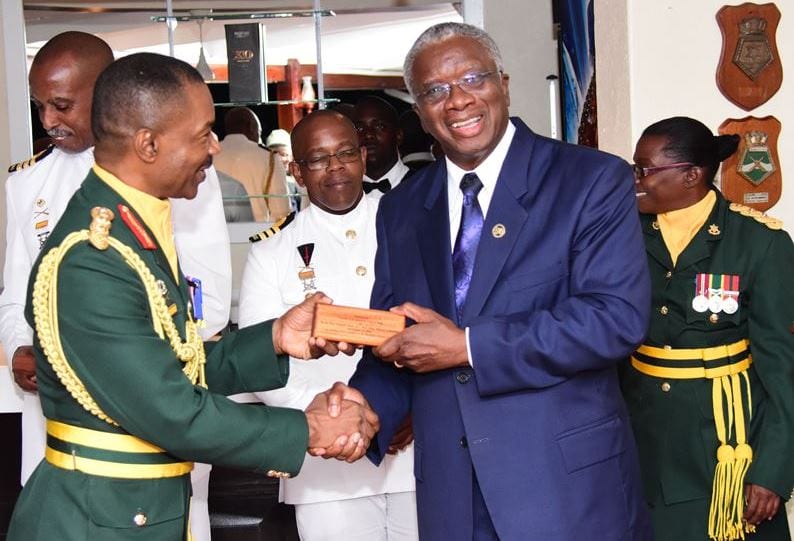 Prime Minister Freundel Stuart has praised Outgoing Chief of Staff of the Barbados Defence Force (BDF), Colonel Alvin Quintyne, for his significant contribution to the development of that institution.

Colonel Quintyne’s 40-year career at the BDF, including 13 as Chief of Staff, ended on Tuesday, January 31. He ceremonially handed over the reins of the Force to his successor, Colonel Glyne Grannum, during a Change of Command Parade at the BDF’s St. Ann’s Fort headquarters.

Mr. Stuart, who is also the Chairman of the Defence Board, stated at a reception following the parade that it was “an especial pleasure” to work with the retired BDF Chief.

Describing Colonel Quintyne as an individual who demonstrated strength of character and gave advice on which everyone could rely, the Prime Minister quipped that it was not his intention to allow the retiree “to disappear into the sunset”.

“I have told him he can take two months’ rest, he has earned it, but that we have some matters to discuss. I do not think that Barbados at the present time, or the Caribbean for that matter, can afford to lose qualities such as those he possesses. I think that the ingredients that have gone into his success as Chief of Staff; …those attributes are reserved for leaders of men and makers of history,” Mr. Stuart maintained.

The Prime Minister thanked the Colonel for setting “the highest possible standards”, and, along with his predecessors, for making the BDF “an institution of which we can all feel justifiably proud”.

Governor General, Sir Elliott Belgrave, thanked Colonel Quintyne for his assistance over the years, especially with the visits to primary schools.

Stating that the outgoing Chief of Staff served with distinction, Sir Elliott presented him with the Governor General’s Gold Medal of Honour for “rendering excellent and meritorious service”.

Colonel Quintyne thanked Sir Elliott and Mr. Stuart for their support during his tenure, and congratulated Colonel Grannum on becoming the fifth Chief of Staff of the BDF.

He encouraged his former staff to maintain the standards of excellence for which the institution was renowned, and to discharge their duties with professionalism.

Deputy Chief of Staff of the BDF, Commander Errington Shurland, also retired on January 31 after 33 years of service, and has since assumed the position of Executive Director of the Regional Security System. He will be succeeded by Commander Aquinas Clarke.