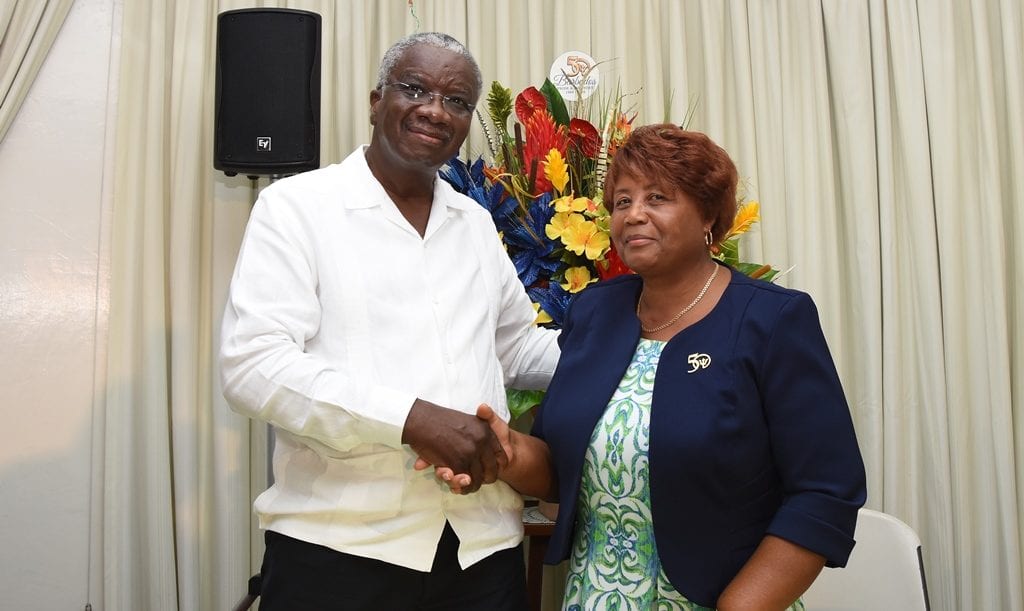 Prime Minister Freundel Stuart has lauded retired Cabinet Secretary, Lucene Wharton-Isaac, describing her as “an asset” to the public service.

He made the comments recently at a retirement function held in her honour in the Cabinet Conference Room at Government Headquarters.

Describing Mrs. Wharton-Isaac as a woman of very strong character, Mr. Stuart said: “Whenever I had to consult with the Cabinet Secretary about anything, I was always left the better off for the exposure….

“Her very deep intelligence and her commitment to the pursuit of excellence always impressed me and reinforced my own view that the Public Service of Barbados has some of the finest human beings you could find anywhere in this region. She is an exemplar of that; very well read, master of the use of the English Language, therefore very impatient with sloppy work and with silly mistakes…”

He stated that she became his Permanent Secretary when the Government came to office in 2008, and he was assigned to the Office of the Attorney General and Ministry of Home Affairs.

According to him, she guided him through all the intricacies of his daily responsibilities. He noted that even though he held that portfolio for only two-and-a-half years, he could rely on her.

“Whenever in doubt, I could sit and discuss matters with her and very patiently and very motherly she would take me through the paces and help in the building of my personal confidence as a Minister of the Crown,” he asserted.

Mr. Stuart disclosed that he asked Mrs. Wharton-Isaac to work as Cabinet Secretary when her predecessor retired. He said what he admired about her then was that she was not afraid to ask or seek clarification as she traversed new territory, nor was she too proud to say ‘I do not know’.

The Prime Minister thanked her for being a “splendid civil servant” and for the contribution she made to the Cabinet in the two years and nine months she was there.

“Every Cabinet Minister has testified at some time to the fact that she has been an asset to the Cabinet Room and we have all benefited from her accumulated wisdom, from her caring and commitment to the pursuit of excellence,” he stated.

He stressed that there was no room for mediocrity in this country, saying Barbados did not complete 50 successful years of Independence by being mediocre. He contended that it was only the pursuit of excellence that would get citizens where they wanted to, and opined that Mrs. Wharton-Isaac had been an exemplar of that pursuit.

Mrs. Wharton-Isaac said she was pleased she was able to make a meaningful contribution to the public service over the years, disclosing it was the only place she had worked, having started on September 4, 1967.

“I have totally enjoyed my working life in the public service and I have absolutely no regrets. After all, this is where I was allowed to grow and develop into the person I am today, with the assistance of several other public servants… I valued my reassignments and I valued all of my transfers and I never thought I was being penalised by being transferred; I saw it as an occasion to learn and to grow,” she stated.

The retired Cabinet Secretary urged civil servants to build relationships with persons in other Ministries so that when they needed help for various tasks, it would be forthcoming. Mrs. Wharton-Isaac will retire on October 10 this year, after working 49 years in the public service. She is currently on pre-retirement leave.

During the retirement function, her colleagues spoke glowingly of her, describing her as “meticulous”, “caring”, “gentle”, “compassionate”, and “having a heart of gold”.