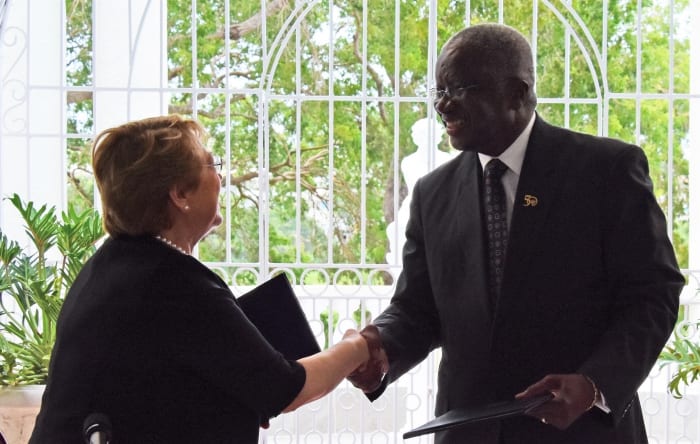 At the end of the near hour-long discussions, Mr. Stuart and Ms. Bachelet signed a Joint Declaration, which outlines the areas of bilateral cooperation being pursued between Barbados and Chile, as well as cooperation at the regional level of CARICOM and in the international arena.

The Prime Minister told the media afterwards: “We discussed some common challenges that our countries face and considered how we might work together on international tax matters, especially in light of Barbados’ continued interest in concluding negotiations between our respective tax authorities for a Double Taxation Agreement.”

He further stated that they also looked at how they might work together to implement the Paris Agreement on Climate Change; to preserve and protect their oceans and seas for future generations; and increase and enhance the trade with Chile in the area of goods, in the first instance, eventually expanding to include trade in services.

Mr. Stuart said that Chile’s generous technical assistance programme executed by the Chilean International Agency for Cooperation and Development had been playing an important role in building capacity among public servants across a range of disciplines critical for Barbados’ development, including in adaptation to climate change, disaster management and methodologies for teaching Spanish as a second language.

He added that both he and the President had agreed that a “solid foundation” had been laid to encourage trade in goods and tourism flows between the two countries, with the signing of an Air Services Agreement in July 2016. 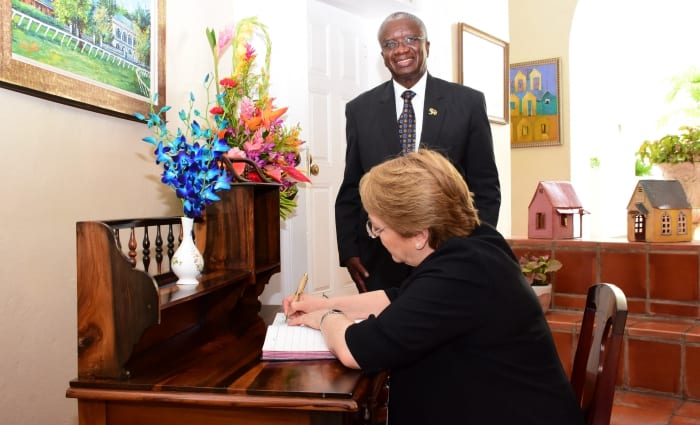 President Bachelet added that the Air Services Agreement would be a very important point for the increase of trade and the free flow of tourists.

She noted that Chile had a long-standing partnership with Barbados and CARICOM in the area of development cooperation and stressed that many Barbadians were actively participating in a number of projects, namely Spanish-level training, good governance and transparency, agricultural practices, disaster management and climate change adaptation.

Describing her official visit as “very important”, President Bachelet said she considered this visit a unique opportunity to strengthen ties of friendship, share views about the regional reality and to continue the work Chile started within CARICOM last year when she attended the Heads of Government meeting in Guyana.

She stressed that Barbados and Chile’s strong relationship was based on their shared values of democracy, and respect for human rights and the rule of law.