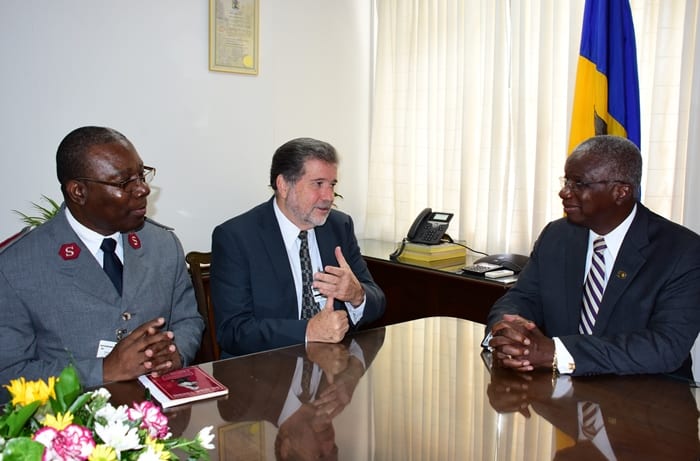 Prime Minister Freundel Stuart listens attentively to Chairman of the Advisory Board of the Salvation Army, Paul Bernstein during the courtesy call while new Divisional Commander, Major Darrell Wilkinson, looks on. (C.Pitt/BGIS)

Prime Minister Freundel Stuart will soon receive the National Values Assessment report which will outline the features of Barbadian life that should be reclaimed, retained or discarded as quickly as possible.

Mr. Stuart disclosed that the report, currently being prepared by the Sir Arthur Lewis Institute of Social and Economic Studies, would be handed over to him on September 12. “Based on the findings of that report, I want us to have a national discussion on where we need to go,” he stressed.

He made the disclosure recently when Chairman of the Advisory Board of the Salvation Army, Paul Bernstein; the new Divisional Commander, Major Darrell Wilkinson; and Community Relations Director, Denzil Walcott; paid him a courtesy call at Government Headquarters.

The Prime Minister explained that the study, entitled: Barbados At 50: The Barbados National Values Assessment 2016, would outline the views of the population in relation to where we are as a people at this stage of Independence.

Mr. Stuart lauded the Salvation Army for its “great work”, saying the organisation had contributed “massively” to the stability of Barbados over the last 100 years.

During the courtesy call, the Salvation Army officials updated the Prime Minister about their various projects, including the Feeding Programme and the Christmas Kettle Appeal.