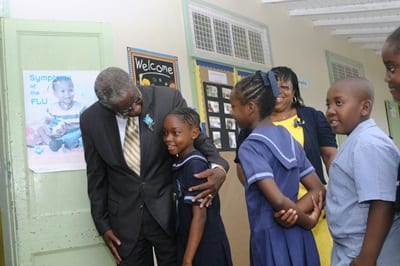 Prime Minister Freundel Stuart has called on those involved in the education system to communicate to its beneficiaries that education is for their personal empowerment.

Mr. Stuart made the comments last evening during the opening ceremony of the Fifth International Conference on Higher Education at the Hilton Barbados Resort. Pride & Industry: Celebrating 50 – Vision, Leadership, Engagement: Transforming Education in Barbados, is the theme of the two-and-a-half day conference, which is being hosted by the Ministry of Education.

The Prime Minister told the large audience that persons were empowered by education and they should never lose respect for the creative power of learning.

“A concern across the Caribbean is that because we have had to play so much catch up after slavery, that what has had to be fought for by our fore bearers, is now being taken for granted to such an extent by the beneficiaries of their efforts, that we are in danger of losing our capacity to sensitise them to the importance of what it is we are enjoying. That is not a luxury that small, struggling countries here in the Caribbean can afford,” he contended.

Mr. Stuart stressed that the message which must be sent to students at the primary, secondary and tertiary levels was that education would put them in positions where they could exercise greater control over their lives and be responsible, to a greater extent, for molding their own destiny.

He said that every child in Barbados was entitled to a primary and secondary education, even if it was through home schooling. He added that even though tertiary education was optional, successive Governments had tried to make sure that those who opted to access it could do so without much difficulty.

The Prime Minister noted that Government was committed to children accessing nursery education. He pointed out that a significant number of nursery institutions were being strategically built across Barbados to make it easy for parents to have access to them.

He stated that Government was receiving some assistance in this regard from charities, including the Maria Holder Memorial Trust. He said that relationship had been a great benefit to Barbados, and publicly thanked the Trust for the interest shown in the children of this country.