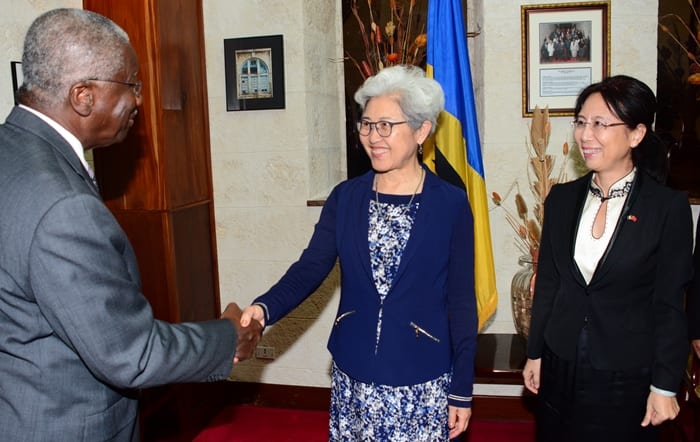 Prime Minister Freundel Stuart has posited that concessional assistance to Barbados and other countries in the Caribbean should be based on a vulnerability index instead of the GDP (Gross Domestic Product) per capita index currently used.

During a recent courtesy call with Madame Fu Ying, chairperson of the Foreign Affairs Committee of the Chinese Congress, at Parliament Buildings, Prime Minister Stuart noted that the region relied on countries like China to be part of the advocacy for its cause because China’s voice was highly respected in the international community.

Mr. Stuart explained that because of its geographical location, the region was exposed annually to the path of hurricanes, making disaster preparedness, management and mitigation issues of continuing concern.

But, he said, because the international community treated countries like Barbados as middle-income countries based on the “dubious measurement” of GDP to per capita, these countries were shut out of concessional help.

“We have seen in the Caribbean how three hours of rainfall can wipe out 17 per cent of a country’s GDP. So what we have been arguing is that the international community must take cognisance, not only of what has been achieved but also the risks to which these islands are exposed and how fragile our progress can appear to be if a hurricane hits this region,” the Prime Minister submitted.

Madame Fu, in response, told Mr. Stuart that China was seeking to expand its role in the world and an important part of its focus was on helping developing countries.

She said China was committed to the Paris Climate Change Agreement, as well as issues of globalisation and free trade. She also expressed appreciation for Barbados’ support of the One China Policy.

The two dignitaries also discussed China’s involvement in a number of local projects, including the Garfield Sobers Gymnasium, Sam Lord’s Castle and the Confucius Institute at the Cave Hill Campus, UWI.