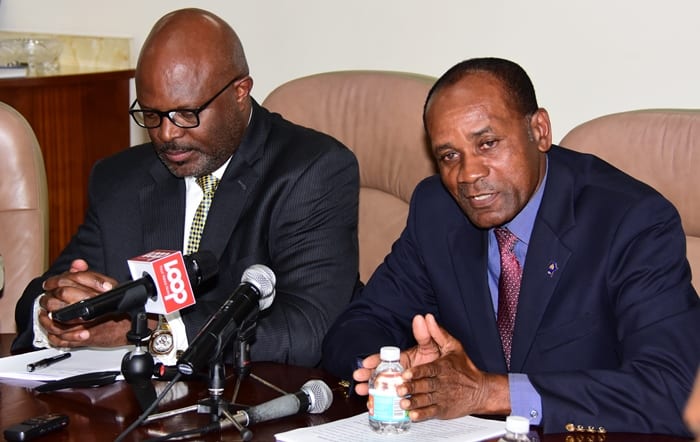 Acting Commissioner of Police, Tyrone Griffith reassured the public that Barbados remains a safe place. To his right is Attorney General and Minister of Home Affairs, Adriel Brathwaite. (C.Pitt/BGIS)

Barbados remains a safe and secure place for residents and visitors despite a recent spike in crime.

And, with the Crop Over season expected to move into high gear over the coming weeks, Acting Commissioner of Police Tyrone Griffith, has sounded the warning bell to expect more stop and searches as lawmen seek to weed out the criminal element and ensure the safety of others.

He made these assertions during a press conference with Attorney General, Adriel Brathwaite, and the top brass of the Royal Barbados Police Force at Police Headquarters yesterday.

We are going to be demanding from our officers maximum output. We will be putting more people on the streets… More officers will be conducting operations… so we are seeking the public’s cooperation with law enforcement,” he urged.

The Acting Commissioner appealed to persons who may be detained for a stop and search to cooperate with and support the police as it was for their own protection.

He explained that over the past several months, the island had witnessed a spike in violent crimes. “[But], I want to assure Barbadians that we are well aware of the situation and that we are doing all in our power to ensure that Barbados remains a safe and secure place for all Barbadians and visitors,” Mr. Griffith said.

He noted that the island had recorded 19 murders for the year, of which 15 were committed through the use of firearms. “That in itself is significant. In 2006 we had 35 murders and in 2015 we had 31 murders, which is [also] significant when on average Barbados has an average of 25 murders a year. [But], these spikes occur occasionally,” the Acting Commissioner explained.

However, Mr. Griffith pointed out that while only 20 per cent of murders committed in 2006 were committed with the use of a firearm, that figure rose to 72 per cent being committed with a firearm in 2016. “So there is a changing trend and we are setting about to do all in our power to address the issue,” he assured the public. 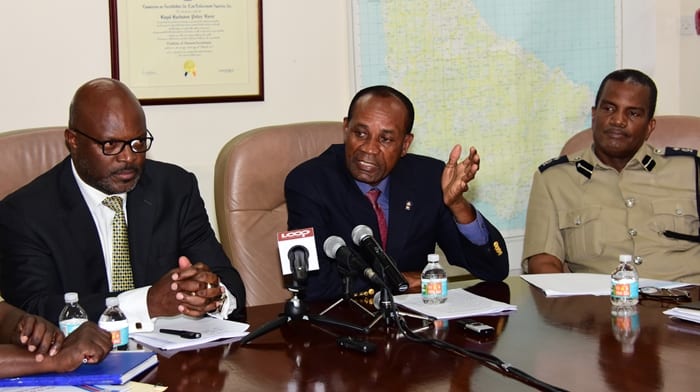 The Acting Commissioner observed that new trends were also being witnessed in the murders occurring this year, with many being committed among persons who knew each other and persons retaliating because of drugs and fighting for turf. “Many of the deceased persons are themselves perpetrators of heinous crimes,” the island’s top cop suggested.

He added that while in the past persons would report these matters and cooperate with the police, they were now trying to exact their own revenge, thereby making the police’s jobs more difficult in solving matters pertaining to gang violence.

Meanwhile, Attorney General, Adriel Brathwaite, appealed to business owners and members of households to install more security cameras so the footage could be used during investigations, if necessary.

He also dismissed suggestions that the spike in crime could be linked to the island’s fiscal challenges. “In the 1930s, there was high unemployment we were not as sophisticated in the 40s, 50s, 60s, and 70s, but yet we did not have the level of violent crime we are having today.

“It is difficult for me to accept what those commentators are saying, that we have high unemployment and therefore the type of crime and the high crime rate that we are seeing. I don’t accept that based on our own history,” he maintained.