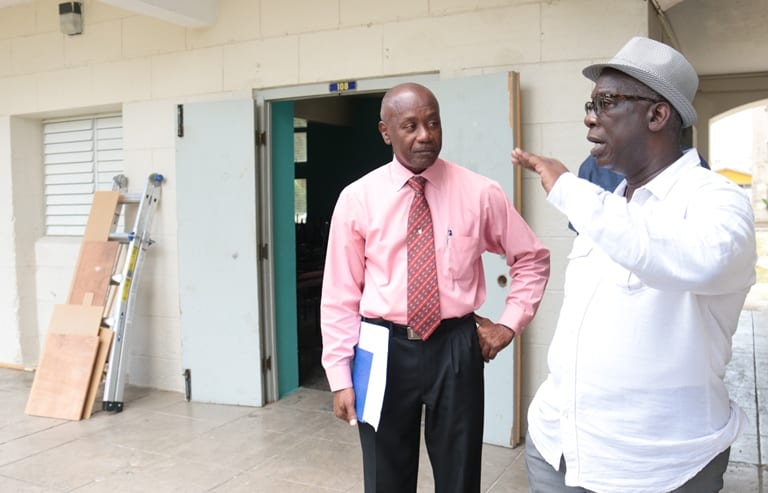 Minister of Education, Ronald Jones, speaking with the Principal of the Combermere School, Vere Parris, while touring several schools in various stages of renovation. (J. WeekesBGIS)

All Schools should be ready to reopen at the beginning of the new school year.

This was the expectation voiced by Minister of Education, Ronald Jones, who recently spoke to the Barbados Government Information Service following a day long tour of eight public schools in various stages of renovation.

According to Mr. Jones the repair work, which totalled 1.5 million dollars, had been “reasonably successfully” and a certain level of readiness would be established for the commencement of the coming academic year. He noted that although work has not yet been completed, the progress is promising.

“Not all schools are 100 per cent completed but a majority of them are. We have about five or so schools that we will keep an eye on over the course of the next week but we are assured that they should be ready…I am convinced that barring unforeseen circumstances, maybe weather, rain and things like that we should [have] the children back in school.”

Project Manager in the Education Project Implementation Unit, Richard Harrison, noted that of the eight schools, major work was conducted on two blocks on the Westbury Primary School.

“One of the two-storeyed blocks was definitely in need of uplift – both interior and exterior,” he stated.
He added that drainage issues with a particular sewerage point were also addressed.

“By the time that project is over in another week, [Westbury School] will be a plant that has a very different interior and exterior appearance,” he assured.

The Combermere School also received much needed renovations which sought to address the recently publicised issues of natural gas and sewage leaks among other things.

“To a great extent those issues have been addressed,” Mr. Harrison said, while adding that the Ministry had been able to “manage funds” to assist the school with re-guttering the major blocks so that the drainage coming off the building would be better controlled.

Ongoing work at the schools includes the painting and reconditioning of walls, ceiling work, roof work, and the replacement of breeze blocks.