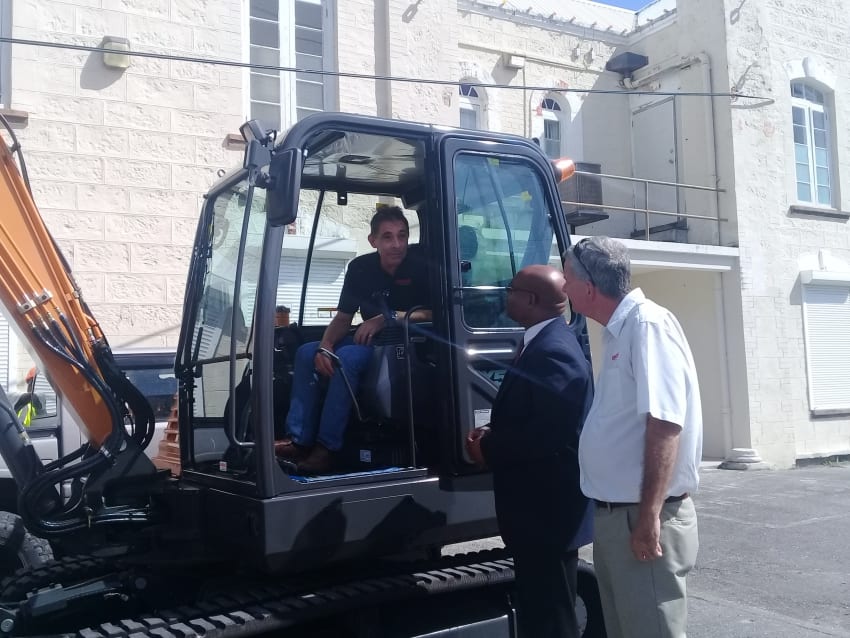 The Barbados Water Authority (BWA) will be connecting the south coast and Bridgetown sewage networks, in an attempt to ease the pressure on the south coast sewage system.

General Manager of the BWA, Keithroy Halliday, made the announcement as he spoke to the media at the site, prior to receiving two of four 5.5 tonne excavators from Innotech Equipment Incorporated. He said the equipment would be deployed “immediately” to accelerate the ongoing operation.

Mr. Halliday said officials were mindful of the additional load that would be placed on the Bridgetown sewage system, and was putting steps in place to increase surveillance and make the link a gradual process.

“We’ll start with one pump and then possibly two or three other pumps. In addition to that, we have to make sure we upgrade our pumping facility at the River Road Lift Station, and we need to make some [preparation] changes at the Bridgetown Sewage Plant,” he explained.

However, the General Manager cautioned that it is not a sure-fire solution, stating: “There are really no guarantees. We’re not absolutely certain if it will work to the level or extent that we would want it to, but we cannot not explore the options.”

In addition, the BWA is considering disconnecting some of the commercial entities in the most troubled areas, as part of efforts to reduce overflows. The Environmental Protection Department has been notified of this, and to date, one business has had its waste diverted.

“For instance, KFC had had a dual system with a septic tank and we’ve recommissioned that septic tank, and we’re looking to see if there are any others where we can recommission even the suck well or septic tank,” Mr. Halliday revealed, noting they are eyeing at least “another two or three” businesses.

He said the BWA was mindful of the financial toll the situation has had on businesses in the area and was hopeful the move would help to normalise their operations, given the circumstances.

Mr. Halliday also took the opportunity to reassure the public that the Barbados Water Authority’s Waste Water Division was exploring all possible options and was doing its best to remedy the situation.