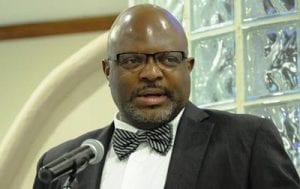 Challenges being experienced at some post offices across Barbados are being addressed by Government.

This assurance has come from Minister of Home Affairs, Adriel Brathwaite, who has also appealed to postal workers to “bear with us”, as work is undertaken.

Speaking during an awards ceremony and dinner for retired postal workers at the Sea Rocks Dome, Mr. Brathwaite said Government recognised that work needed to be done at the Welches, St. Andrew and St. James post offices.

“We are aware of the work to be done and will ensure that the lives of those who work in the facilities will be transformed,” he stated, stressing that a work environment should be in the best possible condition for workers.

Meanwhile, he commended postal workers for the work they continued to do despite the challenges and advances in technology. “Internationally, the Barbados Postal Service is well recognised and appreciated. When it is mentioned internationally, it is done with great respect and enthusiasm,” Mr. Brathwaite said.

Urging postal workers to embrace the technological advances and find new ways to make themselves relevant and increase their profit margins, Mr. Brathwaite said he was confident that plans for the post would result in them remaining relevant.

Noting that the nine retired postal workers being recognised had a total of 342 years of service, the Minister urged them to find activities to become involved in to keep busy. “Devote time to your church or community. Find a young boy or girl to adopt and guide because we will all benefit as a society,” Mr. Brathwaite suggested.

Postmaster General, Margaret Ashby, said there was a tendency to forget to honour people when they were alive, and noted expressions of gratitude should not be limited to family, but be extended to the workplace.

“Tonight I am proud to be a part of the Barbados Postal Service, an organisation which takes the time to recognise people who gave between 20 and 40 years of service… Tonight we say thank you,” she stated.