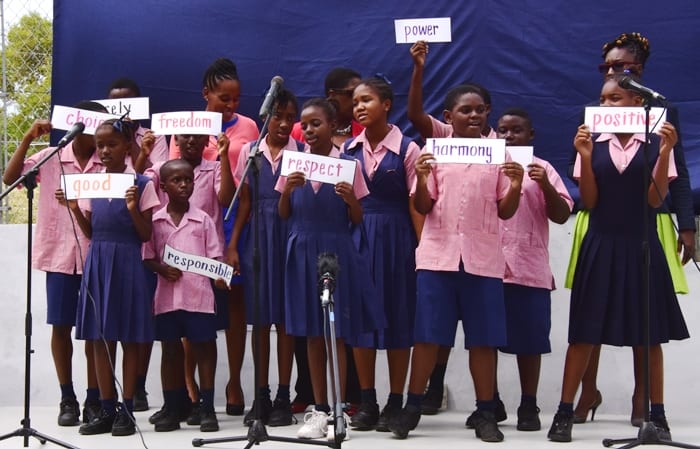 Students of the Charles F. Broome Memorial School performing at the launch of the Power of Choice initiative. (C.Pitt/BGIS)

Initiatives such as The Power of Choice, which dovetails with the Schools’ Positive Behavioural Management Programme, are helping to shape schools into what the Education Ministry expects them to become.

“That is, places of discipline, places of learning or centres of learning; centres of hope, joy and peace, diligence, respect and commitment,” said Minister of Education, Science, Technology and Innovation, Ronald Jones, as he addressed last Friday’s launch of The Power of Choice, at Charles F. Broome Memorial Primary School.

The launch saw the Government Hill institution becoming the first primary school on the island to sign on to the Power of Choice. While commending its introduction, Mr. Jones said Charles F. Broome was one institution that had the support of parents and teachers and this kept the school “on the cutting edge of excellence”.

Managing Director of the FreeMind Institute and Power of Choice Founder, Errol Griffith, also lauded Charles F. Broome for being “the world’s first Power of Choice Primary School”.  Explaining the concept behind the campaign, he pointed out that it was like an operating system on a computer but created by God.

“He gave you an operating system with a number of rules to do and not to do… One thing he gave us all was something called free will and all the Power of Choice is highlighting and reminding us every moment of every day [is] that we have free will and so it is not new; it is not our wisdom; it is God’s wisdom.  What we want to encourage, is to use the operating system that will result in their lives being the best that they can be,” he said.

Other schools involved so far are Princess Margaret Secondary, Christ Church Foundation, Darryl Jordan Secondary, Queen’s College and St. Leonard’s Boys’. The campaign has seen banners with Power of Choice messages placed at schools with reminders to students and others that they have to control behaviours, actions and decisions.

As part of the ongoing initiative at the school, students at Charles F. Broome can look forward to receiving Power of Choice bookmarks, t-shirts and other products. They will also get an opportunity to form a Power of Choice school club, where they can showcase their talent in the arts, drama, dance and graphics.