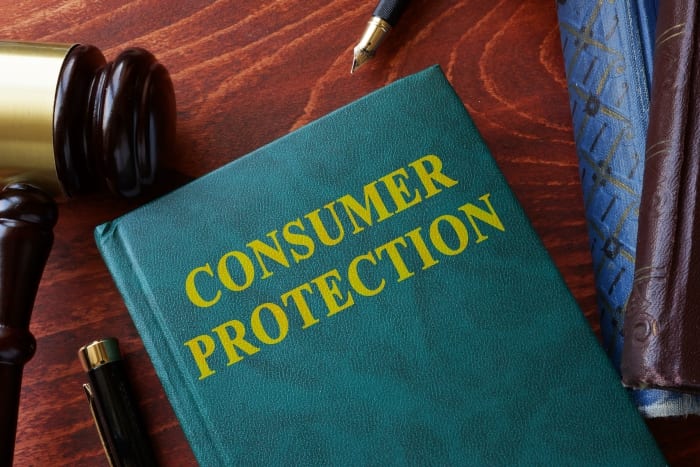 The Consumer Guarantees Act (CGA) is one of the most ground-breaking pieces of legislation for protecting consumers on the island, and, if used in collaboration with other legislation, can offer further protection in the digital environment.

This was intimated last Thursday as Attorney-at-law and Lecturer at the University of the West Indies, Ayana Young Marshall, shared her views during the Fair Trading Commission’s (FTC) Lecture on the topic: Consumer Protection in A Digital Era.

She told the large gathering at the Accra Beach Hotel and Spa: “I think it is the most ground-breaking legislation for consumer protection. I haven’t really found legislation that goes as far as this, taken together with the Consumer Protection Act.  In fact, I actually would like to see those two Acts merge into one.”

Noting that the CGA defined the consumer as an individual person who acquired goods or services for personal, domestic or household use, she said this clearly eliminated businesses which were still governed under the Sale of Goods Act that came after 1895.

Adding that the CGA, which came about in 2003, remedied many of the shortcomings of the Sale of Goods Act, she noted its remedies included the so-called three “Rs” where one can ‘Refuse’ to accept the goods; a consumer can have a defected item ‘Replaced/Repaired’; and have the purchase price (or part of it) ‘Refunded’.

While stating that the FTC did not administer the CGA, per se, Mrs. Young Marshall said it was useful to mention since “it goes to the protection of consumers in Barbados”.

“What is ground-breaking about this legislation is that there was the provision for damages if the matter went to the Consumer Claims Tribunal and there was hardship or injury or inconvenience, damages could be had. And, I think that is fairly fascinating!” declared the attorney, explaining that the service must performed with a certain skill, be fit for the purposes rendered; it must be completed within a reasonable time and there must be a price commitment.

Furthermore, it was pointed out that if one believed his/her rights were breached under this legislation, he/she could contact the Public Counsel who would mediate on the part of the consumer and if mediation failed it would go to a Consumer Claims Tribunal. 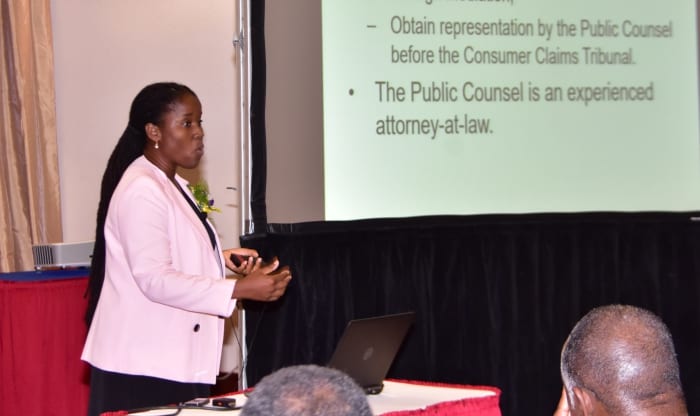 Attorney-at-law and Lecturer at the University of the West Indies, Ayana Young Marshall, speaking at the Fair Trading Commission’s (FTC) Lecture on ‘Consumer Protection in A Digital Era’. (C.Pitt/BGIS)

The Public Counsel, it was noted, provided legal support to consumers at the expense of the Government of Barbados. Emphasising that the legislation was far reaching, the Lecturer said since the introduction of it, almost 20 years ago, where there was opposition by merchants or sellers, there has instead been a lot of cooperation today. “Sellers tend not to be on the wrong side of the legislation; so that’s the first part of protecting consumers in Barbados,” she said.

Intimating that these various Acts could themselves serve to address protection of consumers in the digital era, she noted the digital environment took into consideration technological and telecoms developments; globalisation, and trade liberalisation.  It was noted that the exponential growth of trade in services, and therefore e-commerce, had changed the way we interacted with companies.

“So, we have had legislation and we have had it for almost 20 years to cater to issues in a digital environment; We have legislation that creates or removes any distinction between paper transactions and digital transactions; so a contract can be digital and digital information can be used as evidence in a court of law. There is also provision for electronic signatures and a process for ensuring that a signature is attached to the correct person, and so forth.”

The attorney also mentioned the Computer Misuse Act, which provided for the protection of computer systems and prohibited unauthorised access and/or use of this information.