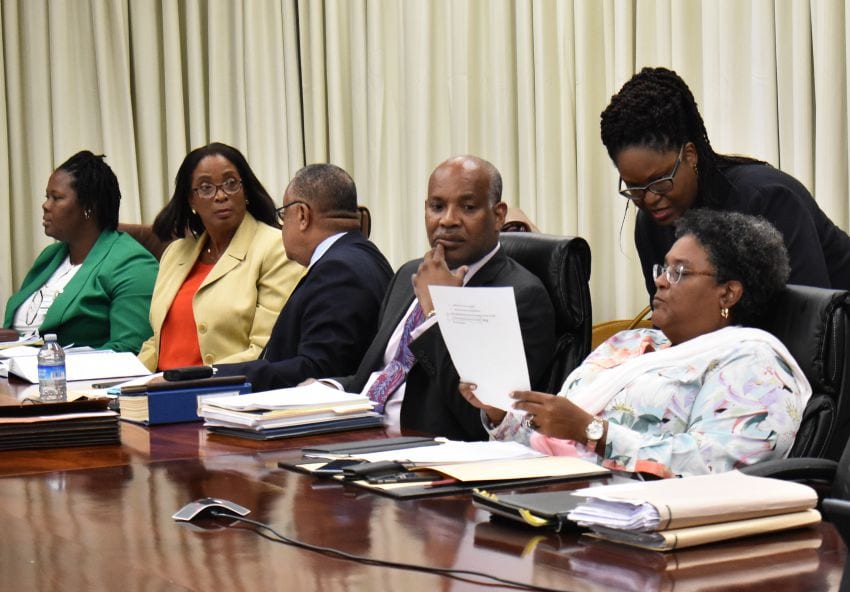 Prime Minister Mia Amor Mottley signalled her intention to be ready for her upcoming CARICOM summit on the CSME, by holding a preparatory meeting at the Cabinet Office yesterday.

Prime Minister Mottley has lead responsibility for the CARICOM Single Market and Economy as part of the region’s quasi-Cabinet. She will lead a delegation to the Eighteenth Special Meeting of the Conference of Heads of Government of the Caribbean Community on the CSME from December 3 to 4 in Trinidad and Tobago.

At the preparatory meeting, Ms. Mottley held discussions with CARICOM Secretary General Ambassador, Irwin LaRocque and his team via video conference to finalize the items on the agenda, from the Secretariat’s Headquarters in Guyana.

In her remarks to the Secretary General, Prime Minister Mottley said that the region was at a stage where a lot could happen, but emphasized that leaders needed to be strategic in their decision making.

She pointed out that if the CSME was to go forward that a different institutional framework was required, and stressed that the effectiveness or failure of the CSME could not only be determined by the staging of the Inter-sessional and Regular Meetings, but by stakeholders collaborating to make sure decisions were implemented.

“Let us work together to take that quantum leap as far as the process to decision making is concerned. Let us come out of Port-of-Spain with something that is as major as the Grand Anse Declaration,” she implored.

She added: “We have to come to work day-by-day in our CSME units, focal points and the [CARICOM] Secretariat to make sure that we can push the agreements and the agenda, and the LAC [Legal Affairs Committee] can meet every month, every two months … through virtual collaboration.”

Ms. Mottley also expressed the hope that CARICOM Heads of Government would embrace the digital age to allow the people of the region to be better included in the process and called for the inclusion of trade unions and the private sector.